Digital Art Under the Sun
By Marisa Olson 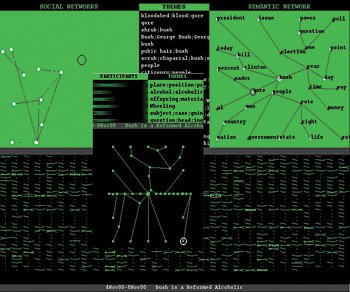 For much of the world, and even for residents of America's other 49 states, California is more of a fantasy than a place. This fantasy stipulates in part that this West Coast territory is comprised mostly of balmy beaches swarming with beach bunnies, palm trees, and pina coladas. There are many flaws in this fantasy, but the idea that California is rich in resources is true. Among those to be celebrated are its artists and, in particular, the large number of brilliant new media practitioners employed by the University of California system. Talk about brain trusts! Curator Christiane Paul has tapped into this vast resource in organizing "Scalable Relations," a series of exhibitions featuring artists who are faculty members of the UC Digital Arts Research Network (DARnet). Ordinarily this kind of members-only context would have a sour ring to it, but the assignment to bring together such a large and diversely talented group of artists actually establishes the onus to make some deeper comment about what they do have in common: new media. There is a kind of challenge in the act of curating or criticizing new media art, which revolves around the question of the extent to which one should foreground technology. For some artists, the medium is, well, the message, while for others it's merely a tool to address the subject of technology. And of course, there's so much middle ground... This show include works that very diversely "illustrate the complexities and shifting contexts of today's information society." But the very fact that our society is an information society points to a scenario in which technology will sometimes be blatantly paramount, while at other times it will be transparent or embedded. Frankly, the very notion of what constitutes "high tech" is shifting so rapidly, that the haute aspiration might best be downplayed in favor of emphasizing the long history of information itself and the roles it has played in our lives and, in turn, our art-making. This seems to be the success of the "Scalable Relations" project, whether looking at the complex networks that establish the social life and labor practices of teensy micro-organisms, as in Beatriz da Costa's Invisible Earthlings, or making tangible and discernible cartographs of the social networks, behavioral patterns, and technical protocols linked with human email communication, as in Warren Sack's Conversation Map. The first iteration of the show just opened at UC Irvine's BEALL Center for Art and Technology and will be touring to venues at UCLA, UC San Diego, and UC Santa Barbara, but you can follow it online, here. - Marisa Olson