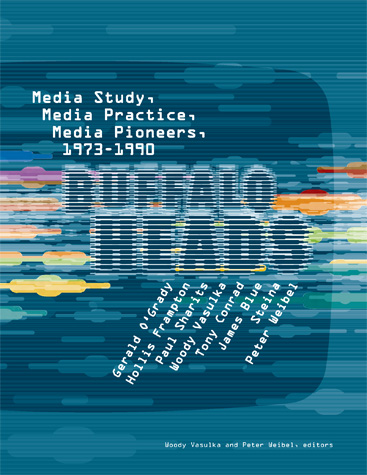 In the early seventies Gerald O'Grady, a professor of English Literature at the State University of New York in Buffalo, was asked to become director of the euphemistically titled "Educational Communications Center." The division was to provide technical support for the entire campus. Sensing a thankless administrative appointment he agreed, but only if he could simultaneously create and direct a department dedicated to the study of emerging media, one that would provide artists and filmmakers access to these technologies and a theoretical basis from which to explore it fully. Thus, the Center for Media Studies (MediaStudy/Buffalo) was formed. Groundbreaking in its scope and focus, the faculty included filmmakers Hollis Frampton, Tony Conrad, Paul Sharits, and James Blue, video artists Steina and Woody Vasulka, and Peter Weibel. The book Buffalo Heads: Media Study, Media Practice, Media Pioneers, 1973-1990, edited by Woody Vasulka and Peter Weibel, thoroughly documents the people and activities that were a part of this highly influential center. Part exhibition catalog (a similarly titled exhibition "Mind Frames: Media Study at Buffalo 1973-1990" was mounted at ZKM in 2007), part catalog raisonné, and part coffee table book, and coming in at 837 pages and almost 10 lbs, it could be called the definitive text on this place and period.

First and foremost, the book is gorgeous. Well designed, with hundreds of beautiful full color reproductions of works, the visuals reveal the massive scope of the center's programming and exhibitions. Reproductions of flyers, posters and newsletters show the luminous lineup of guest lectures and visiting scholars that included, to name only a few, Jean-Luc Godard, Stan Brakhage, Chris Marker, Sally Potter, and Michel Foucault.

Each chapter is dedicated to an artist and/or faculty member, and O'Grady, a visionary figure himself, is the subject of the opening chapter, which includes previously unpublished lectures, reprints of early articles and other texts that relate to the pedagogical philosophy of Media Studies/Buffalo. The text "The Preparation of Teachers of Media" outlines the basic curriculum, reflecting an interest in all forms of media and art practices: photography, film, music, performance, video, installation, and electronic art. Not simply an art school, or a film school, the curriculum was heavily invested in the teachings of Marshall McLuhan, literary theory, and also focused on the social, political and oppositional potential of new media forms. This social consciousness is evidenced by many of the included images and texts, illustrating that issues such as community development and civil rights were every bit as prevalent as the structuralist film and homemade video synthesizers for which most of the faculty were known. 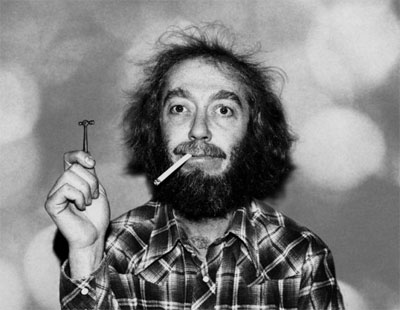 Image: Hollis Frampton, The Metahistorian and the Tool, 1976

The chapter on structural filmmaker Hollis Frampton includes a number of autobiographical texts, poems, and excerpts from his previously published materials, such as his "Dialogues" with minimalist sculpture Carl Andre. The texts are illustrated with film stills, photographic portraits, and, most interestingly, many notational diagrams that detail the complex systems that enabled many of these works. The chapter on Paul Sharits includes reprints of his articles from Film Culture, and syllabi that outline the pedagogical approach of many in the department -- that is, to look at media in linguistic and cognitive terms rather than the narrative and psychological perspectives that had previously dominated film studies. In addition to his provocative arguments, there are also reproductions of some of Sharits' journal pages, and some rarely seen and stunning prints and drawings. 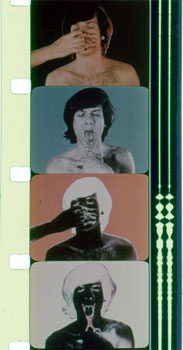 Steina and Woody Vasulka and Peter Weibel represent the non-film contingent. Weibel, who is the founder and director of the location of the Buffalo exhibition and one of the most prolific media art exhibition spaces in the world, ZKM in Karlsruhe, Germany, provided a vital connection between Buffalo and Europe. Weibel's association with both Fluxus and Vienna Actionist artists made him a conduit for ideas and approaches across the Atlantic. One highlight within this section is a great series of photographs and texts about his collaboration on Valie Export's famous Tap and Touch Cinema , an amazing example of expanded cinema in which she invited 'viewers' to reach through a curtained box on her body and touch her breasts for 30 seconds. This is, unfortunately, one of the only direct references to feminist practices in the entire book. 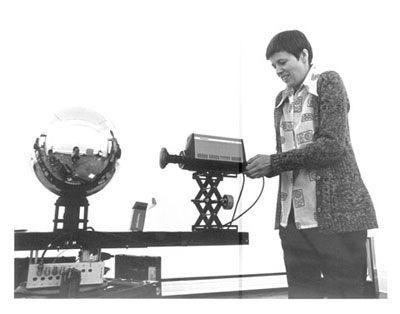 The only woman on faculty at Buffalo during this time was Steina Vasulka (known as Steina), who gets her own chapter, as does her husband Woody Vasulka, and these two chapters draw out fascinating details about their influential careers. Again, by pairing autobiographical texts with technical documents, lecture notes, stills from video works, production records, and documentation of their widely used and highly influential DIY electronics, we get a full picture of their remarkable oeuvre.

Documentary filmmaker James Blue's chapter highlights the political and social bent to the program as well as less 'experimental' elements such as narrative development, fundraising, and distribution. Production notes and transcripts from many of his films are included as are interviews with Jean-Luc Godard and Roberto Rossellini. The only member of this early faculty who is still at Buffalo is the venerable Tony Conrad. From his early film experiments such as his 1966 The Flicker to documentation of his active involvement in free speech and public access television, Conrad's chapter clearly lays out why he was and continues to be an influence on artists from Mike Kelley to Cory Arcangel. 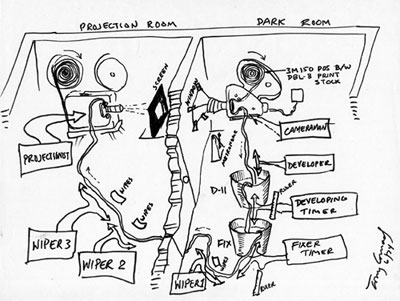 With Buffalo Heads, editors Woody Vasulka and Peter Weibel have created a rich and compelling narrative of an important history that has not yet been told. That these artists should finally get such a volume is long overdue, and given that the account is here described, not by art historians, but by those who lived and created it, the publication begs serious questions about the process of canonization. But simultaneously (and somewhat ironically), it reinforces the position of the "academy" (which functions to reinforce such art historical canon) as preeminent centers for creative contexts. In his introduction, Weibel refers to other institutions, such as the Bauhaus in Germany, and the Black Mountain College in Asheville, North Carolina as key predecessors of Buffalo's approach and outcomes and it is clear they see themselves as part of this art historical narrative. In so doing, Buffalo Heads clearly illustrates that as much as individuals have shaped the history of art, so has the institutional environment around them. Determined not to be left out of the record, these artists have taken it upon themselves to write their own history.

Currently a freelance curator and researcher, and also a writer for Rhizome, Caitlin Jones was formerly the Director of Programming at the Bryce Wolkowitz Gallery in New York, NY. Prior to this, Jones held a combined curatorial and conservation position at the Solomon R. Guggenheim Museum. At the Guggenheim, she co-curated the groundbreaking exhibition "Seeing Double: Emulation in Theory and Practice" and coordinated the Deutsche Guggenheim exhibition, "Nam June Paik: Global Groove 2004." As a key member of the Variable Media Network, Caitlin has also been responsible for developing important tools and policy for the preservation of electronic and ephemeral artworks. In addition to her work for Rhizome, her writings have appeared in a wide range of exhibition catalogs, periodicals and other international publications.