Virtuosos of Voice
By Marisa Olson 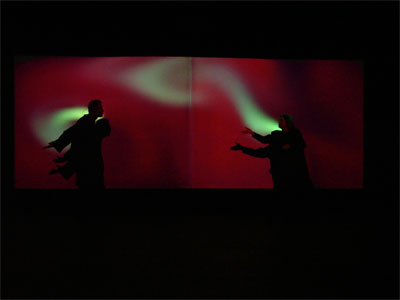 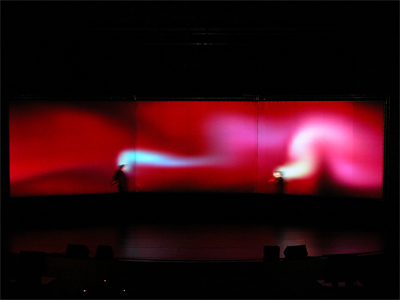 In 2003, Golan Levin and Zach Lieberman developed a project called Messa di Voce, which translates to "placing the voice." Oddly enough, it took almost six years for the Ars Electronica-awarded project to find a place in North America. Tonight at NYU's Frederick Loewe Theater, master vocalists Joan La Barbara and Jaap Blonk will be on hand to help demonstrate Levin and Lieberman's classic computer vision work. The project responds visually to vocal input, so that sound becomes an instrument for drawing and animation. The vocalist's guttural and glottal improvisations will generate a tension between speech acts and speechless performance that's not to be missed. It's the first of three live concerts presented this week by the Electronic Music Foundation, in a series called "The Human Voice in a New World." Each event highlights the richness and diverse uses to which this earliest of instruments can be put. On the 27th, British vocalist Trevor Wishart will appear at Judson Church with the NY premieres of Vocalise and Globalalia. The seminal works explore, respectively, the potential of the voice "when in a tight corner," and the universality of the human tongue. Globalalia processes the syllables of 26 different languages sampled from international radio and TV broadcasts to formulate a sort of vocal dance. And on the 28th, Berlin-based virtuoso David Moss will premiere the English version of his Voice Box Spectra. The Sydney Morning Herald has described the piece as "somewhere between scatting and scary. Think Jim Carey doing an impression of Ella Fitzgerald while being eaten by the creature from Alien 2." Exploring FTL ("faster than logic") communication, the work combines sound, text, and personal electronics in a grouping of new songs. All in all, the three events shed new light on the relationship between mind, mouth, and machine. It's telling that each of these major works received advanced support elsewhere before being presented in the US, but it seems the Electronic Music Foundation is helping us catch up! - Marisa Olson