In the Round
By Marisa Olson 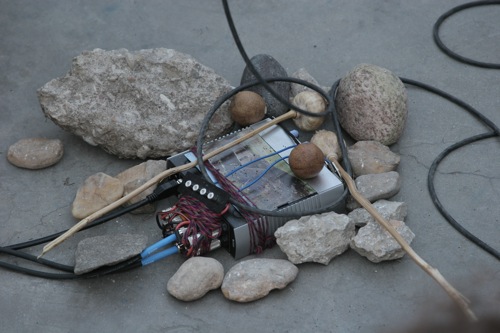 The question of the relationship between performance and its documentation is an interesting, if longstanding one. These relations have continued to shift with the emergence of newer and newer media, so that the telephonic or radio broadcast, camera, and internet transmission become implicated in the content they capture and deliver, often begging a chicken vs. egg-style question of whether the performance or the recording is paramount. The "Stage II" exhibition at New York's The Project gallery returns attention to the site of performance, even as it displays the residual ephemera of artists' actions. The work of artist Dave Allen stimulates a visceral connection with audiences in tapping into sound art's classic obsession with silence to deliver Silence Recordings, Hansa Studios, Berlin (2001), which fills the gallery space with the seemingly-silent recordings of vacant artist studios and empty concert halls. Lucky Dragons is a band and art collective whose work encompasses music, drawing, public collaboration, and more. For "Stage II," they present Showing (2009), a sculptural installation that proves the artists need not be physically present to make noise. An arrangement of their homebrew instruments featuring rocks, wood, and analog electronics sits in waiting for viewers to move them, generating a shift in their electrical field and a resultant shift in the shape of the sounds they are set to make. While these two projects provide perfect bookends for the exhibition, the show also includes work by Larry Krone, Rashaad Newsome, and Superamas, each of whom is engaged in the practice of splicing together object relationships, filmic clips, or cultural reenactments to establish a new interdependence between artist, viewer, stage, and document. - Marisa Olson