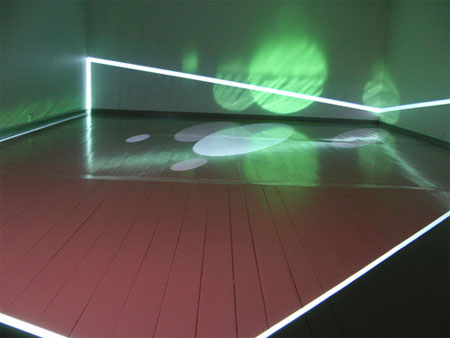 The digital network, where we all spend ever more of our time, is a vast infrastructure of generality. It deploys a system which is standardised, formally defined, highly structured, and internally consistent. If I send you an email, I do it trusting that the interlinked systems of hard- and software, the protocols for data encoding and transmission, the network switches and servers, will all hold together so that the email you receive is the same as the one I sent. Perhaps I'm in Australia, and you are in Norway: we could say that the network generalises our two points in space - for the network, they are the same. As I draft my email it exists as a pattern of voltages and magnetic flux inside my computer. To transmit that pattern effectively, the digital network must erase or resist any local errors or inconsistencies that it might encounter along the way, so that it does not matter if the pattern travels by optical fibre or copper, or in radio waves, or if a boat anchor cut through a cable near Indonesia. It does not matter that your computer is made of different atoms to mine. Those are specificities - local, material events and instances. Digital culture, and networked space, absorbs specificities, compensates for them, rectifies them into generality. Wireless broadband and mobile computing make us into human nodes, bathing in shared connective protocols.

The aesthetics of digital media flow from a related generality, where sound and image are encoded as fields of data. If a pixel is a number, an image is a grid of pixels, video a stream of images, and each of these numbers can take any value at all, then formally, an aesthetics of digital video is only a matter of finding the right values - fishing around in a space containing all possible digital video. If digital media creates this generalised space, anything at all, the media arts are faced with unavoidable questions: not only what to make - which values to choose, but how to choose them, and why?

HC Gilje's work arises from a moment when the anything-at-all of digital video was just opening up, thanks to a combination of new real-time tools, cheap computing power, and some key interdisciplinary influences. Drawing on experimental sound and music, improvisation and performance became important solutions; working live in a specific situation, artists would gather, process, generate, and recombine material. In work from the late 1990s and early 2000s, from Gilje and his collaborators in 242.pilots, as well as video ensembles such as Granular Synthesis and Skot, the result is abstract and intense, a flow of layered digital texture. In performance it saturates the body and senses; big screens, big speakers. Instead of the narrative transport of cinema, which takes us somewhere else, this work creates - and is created in - an intensified sense of presence, what Gilje calls an "extended now". This methodology is vital; it focuses the open-ended generality of digital media in to a point: on this, rather than anything-at-all.

This moment relies on a circuit, a close coupling between artist and media; data flows become experienced events - sounds and images - which in turn inform new data flows, and so on. Audience and performers share a digital-material situation. The specificity of digital media comes forward; for of course these media are always specific, always local, always embodied; but that specificity is usually suppressed by the functional logic of generality. At the same time though, the processes underway here depend on exactly that generality, on the machine's ability to rapidly transform data and shift it between instantiations - from the voltages in video memory to the patterns of projected light.

In nodio (2005-) Gilje creates a system of networked audiovisual nodes that process and share image material. Each node generates sound derived from its image, in a process of automatic translation. On one hand this translation is another demonstration of the abstract pliability of the digital - its ability to transform anything into anything (generality); on the other, its tight audiovisual correpondences generate sparks of material intensity - real events, rather than digital effects (specificity). With these distributed nodes Gilje deploys audiovisual materials in space, creating flows and juxtapositions that function as dynamic sculpture. Of course the formal model of nodio echoes our most ubiquitous generalising paradigm: the network. Once again, the artist applies this digital tendency for generalisation in order to cultivate instances of specificity - the texture and sensation of the here and now.

From drifter (2006) (above) to dense (2006) and shift (2008) (below), Gilje's audiovisual nodes map out a developing exploration of specificity. drifter deploys standard computer hardware, formed into sculptural modules; in passing material between nodes Gilje begins to break the frame of the screen, creating an implicit inter-space. In dense, the hardware moves out of the sculptural field, and the screen is further deconstructed. Instead of the frontal configuration of the cinema / computer, these suspended fabric strips are illuminated from both sides with a video "weave". The familiar architecture of the screen as a blank (general-purpose) substrate containing or supporting image content, is reconfigured here; the specific materialities of screen and content overlap. Even more so in shift, where the nodes are now wooden boxes, illuminated with precisely controlled video projections. As in earlier nodio works sound and image are directly related. Here Gilje extends this fusion to the sculptural objects; each node is also its own speaker-box, so that the digital articulation of sound and image is realised, and grounded materially, in the nodes themselves.

These works drive towards a spatial materialisation of audiovisuals: dynamic constellations of AV intensity, fields for what Gilje calls "audiovisual powerchords". The projectors, speakers and networks of the nodio works present one means to this end, deploying existing media technologies. Again we find an interplay of generality and specificity, as Gilje adapts generalising systems - projectors, computers, networks - to realise materialised instances. The Wind-up Birds (2008) (below) represent another angle of approach; Gilje sets video aside, and creates materialised, local, sculpturally autonomous nodes from electronic and mechanical materials. In these robotic woodpeckers digital media and sculptural embodiment are further enmeshed. The birds communicate using digital radio, and their behaviour is programmed in a custom chip; but their sound is simply percussion - a mechanical switch, tapping on a specially constructed wooden slit-drum. Again this is specificity over generality: a loudspeaker is an acoustic shape-shifter, a technology which promises any sound, in the same way that the screen promises any image. By contrast the Birds produce only one sound, their sound, a specific conjunction of solenoid, timber and vibrating air.

The Birds will run for a month on their own batteries, strapped to trees, calling to each other and any other creatures nearby. These nodes are unplugged: they begin to come away from the technological support system of mains power and the shelter of the gallery or studio, and move out into the world. As in the artist's other work the engineering here is inseparable from the artistic agenda; the Birds are in that sense a realisation of Gilje's spatial and formal aims, an autonomous constellation of intensities. But they also literally expand from there; where the nodio works explore the composition of spaces within a network of intensities, the Birds move outwards, creating points of intensity in the wild, and evoking a spatial alertness - a way of being in and listening to the world - that extends beyond the well-marked edges of an artwork. The Birds are more like an experimental intervention, a digital-material overlay in a complex field of the living and non-living.

Similarly the Soundpockets works (both 2007) make small sonic interventions in urban spaces, pursuing local intensification and juxtaposition through directional soundbeams and micro-scale radio transmissions. Once again we find this interplay of the general - the anything-at-all of the digital - and the specific, the here and now. The "extremely local radio stations" of Soundpockets 2 form a sort of folded juxtaposition of three layers: globalised network infrastructures and protocols, the traced or mediated locations of field recordings, and the specific time and place of the transmissions. Just as Soundpockets 1 uses exotic soundbeam acoustics to perturb urban spaces, Soundpockets 2 shows how we can draw in technological infrastructures in order to reconfigure the real environment, creating flows and distributions that form intense moments of difference and specificity. In this reading Gilje's work is partly critical. Pursuing specificity, and an intensified, material experience of the here and now, it pushes against the generalising tendencies of digital media. By the functional logic of the network, each node is formally identical, and must be effectively insulated from its environment. Ubiquitous computing promises us "everyware" - total connectivity, the complete interpenetration of the network and our lived environment [2]. But if the network is a generalising force, if it erases differences between places, what will life in "everyware" be like? Gilje's work suggests a utopian alternative: networks that are always local in time and space; nodes of right here, right now. Gilje's work strives for what Hans Gumbrecht calls "presence"; a way of knowing the world that is characterised by intense moments of encounter or revelation - aesthetic experiences that place us in the world, and of it, rather than observing from the intellectual distance of interpretation.

The beauty of Gilje's work though is that it not only suggests this prospect, but demonstrates it, makes it happen; and in that sense the work is constructive, rather than critical. In emphasising the specificity of media technologies, Gilje's work shows us a different way to frame those technologies; as always material, always in the world with us - a view I have called transmateriality. As Matthew Kirschenbaum writes, "computers ... are material machines dedicated to propagating a behavioral illusion, or call it a working model, of immateriality." Gilje shows us both sides of this statement, the functional illusion - generality - and its material foundation - specificity. It shows us a way to reframe the network, too; as always local, always specific; a tangle of real flows and propagating patterns; and endless possible ways of reconnecting the world with itself. Finally Gilje shows us one crucial role for the artist, in this context: seeking out configurations that intensify, rather than dilute, our sense of being in the world.

Mitchell Whitelaw is an academic, writer and artist with interests in new media art and culture, especially generative systems and data-aesthetics. His work has appeared in journals including Leonardo, Digital Creativity, Fibreculture, and Senses and Society. In 2004 his work on a-life art was published in the book Metacreation: Art and Artificial Life (MIT Press, 2004). His current work spans generative art and design, digital materiality, and data visualisation. He is currently a Senior Lecturer in the Faculty of Arts and Design at the University of Canberra, where he leads the Master of Digital Design. He blogs at The Teeming Void.