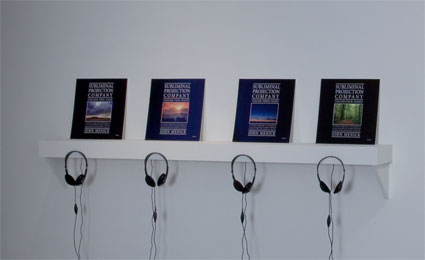 A small but international group show organized by Mireille Bourgeois and Anaïs Lellouche, "They Told You So" takes its inspiration from the Situationists’ concept of détournement, reusing existing media to convey an opposing or alternate viewpoint. Here sound installation and video are the primary forms utilized. Purporting to address and ensnare the viewer, and using deliberate miscommunication to examine rhetoric and technologies that are oriented towards control, the works achieve varying degrees of success.

John Menick’s The Subliminal Projection Company (2009) consists of four 45 minute-long audio CDs of various environmental nature sounds (rain, ocean, crickets, and birds). Masquerading the discs as New Age-y relaxation records, complete with 12 x 12 album covers for each CD, Menick aims to subliminally transfer his own memories into the listener’s subconscious by mixing them in as an overdub at a sub-audible level on the recordings. There’s no clue as to whether the memories are related to the nature sounds on the CDs or if the memories are bad ones that would contradict the sedative qualities of the audio. It’s also hard to say if listeners would really register the transmigrated memories as their own, since memories tend to be visualized in the mind’s eye.

Canadian Benny Nemerofsky Ramsay’s Live To Tell video (2002) divides the screen into sixteen panels, each showing security camera footage of Ramsay in a blank room singing Madonna’s titular song. Ramsay’s project brings back the early '70s, not only for the similarities to the stark scenarios of early single channel/Portapak video art and Bruce Nauman’s primeval filmed studio studies, but in its fascination with surveillance (cf. Francis Ford Coppola’s 1974 film The Conversation or TV’s Candid Camera). Ramsay may have neutered the camera’s spying function, but in the age of YouTube the highjacking of a security camera to gratify a desire to be on screen seems more than a little passé—someone could just as easily sing their favorite Madonna song into the camera on their Mac Book or cell phone. 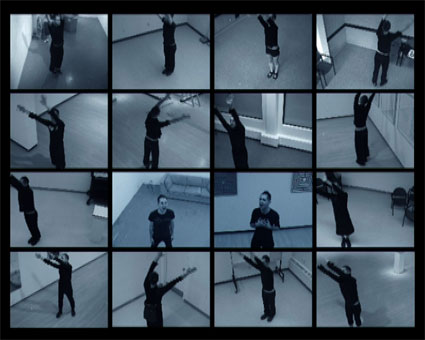 Jon Thomson & Alison Craighead’s Five Lie Detector Reports (2000—2005) are letter formatted prints of the findings of a series of lie detector tests performed on telephone speaking clocks in several different countries. An American speaking clock was considered reliable, being described as “not excited AT ALL during the conversation,” “not stressed”, and “confident in his words”, while clocks in Ireland and Holland were found to be “highly excited during the conversation”, “stressed”, and “not confident.” (Thomson and Craighead are based in the UK, and the Truster computer system they used for the tests originates in Austin, Texas). The flaw in subjecting the clocks to these tests is that the automated speaking voices are not engaged in a conversation, and would not be conscious of the accuracy (and by extension, the veracity) of their own timekeeping. The piece might benefit from the addition of audio examples of the speaking clocks, so visitors could compare the lie detector results with their own assessment of the voices’ credibility. It’s certainly an amusing conceit, and could be read as a comment on lingering neuroses about the boundary lines of the gap between human beings and machines (or a sign of one too many viewings of 2001: A Space Odyssey).

Situated inside a vacuum cleaner, Brina Thurston and DJ Private Time’s sound installation Dark Pump (2008) allegedly involves some sort of sexual fantasy about the vacuum hose. It’s only audible by putting one’s ear to the end of the hose, though, whose dreadful acoustics render the mp3 virtually unintelligible; the placement of Ramsay’s video nearby, the only other piece in the show whose sound is not contained in headphones, doesn’t help either. At the other end of the gallery, Thurston’s video Harm (2007) shows a poodle comfortably situated on a plush pink background, while a female voice relentlessly hurls insults at someone—the poodle? The viewer who’s slipped on the headphones? The audio sounds as if the speaker is in another room, so the insults could be directed at an unseen third party—the poodle itself, of course, is unperturbed (as is the viewer, at least in my case). 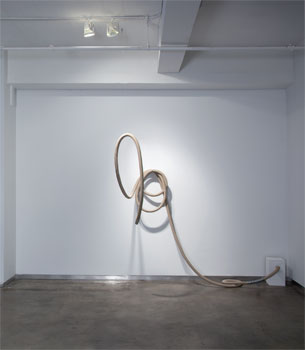 Israeli Roee Rosen’s Confessions Coming Soon (2007) is a nearly-9 minute video intended as a spoof of a movie trailer. In it, an “innocent” young child (Hillel Rosen, presumably the artist’s son) delivers a script, written by Rosen, in English, a language he (Hillel) doesn’t understand (Hebrew and English subtitles are provided at the bottom of the screen—it’s unclear whether Rosen wrote it in English or Hebrew to begin with). He claims, through Rosen’s words, to be a “Pinocchio in Reverse” for a “vicious Gepetto”, and to be “exploited” and “manipulated” by the “ famously depraved” artist to promote an upcoming film of his (Rosen’s) “confessions.” These preposterous exaggerations are obviously part of the farce, but Hillel’s English isn’t really that bad (he seems to understand at least part of what he’s saying) and he looks like he’s having fun, despite the protestations that he’s a “passive conduit” to his father’s “dark whims,” all of which weakens the satire. Not to mention that in real life, movie trailers never last more than 5 minutes and the voiceover announcer is never seen...still, one wonders how the video would play in Tel Aviv as opposed to New York.

The works in "They Told You So" fail to truly subvert the cultural entities they engage or to manipulate the viewer/listener, largely due to their own technical shortcomings. The show does, however, raise interesting questions about the inherent power struggles of time-based art and the gallery situation itself, inasmuch as the effectiveness of several of its pieces depends to some extent on a time commitment on the part of the observer--and gallery goers frequently give a piece little more than a passing glance. The command of attention within the art world could be seen as a subtext here, one in which the artists’ undermining of tools of persuasion may be read in terms of envy as much as a prankish sense of revolt.

Alan Licht is a writer and an acclaimed musician. His career in music spans over two decades, and he's worked with a veritable who's who of the experimental world. Licht was also curator at the famed New York experimental music venue Tonic from 2000 until its closing in 2007, and has written extensively about the arts for the WIRE, Modern Painters, Art Review, Film Coment, Sight & Sound, Premiere, Purple, Village Voice, New York Sun, Time Out New York, and other publications. His first book, An Emotional Memoir of Martha Quinn, was published by Drag City Press in 2003; his book, Sound Art: Beyond Music, Between Categories, the first extensive survey of the genre in English, was published by Rizzoli in fall 2007.

I visited last week, and most enjoyed the "Lie Detector Reports". Additional audio would just make the piece busy, and it feels more calm and introspective to me.

I went with some Danish friends who haven't seen anything like this before, and they were taken aback by "Harm". They (presumably) didn't notice the acoustic separation of the voice, and could only watch it for ten seconds (with raised eyebrows) before needing to stop.

I was really curious to hear "The Subliminal Projection Company", but I think it was "broken". I didn't hear anything coming out of any of the headphones. I considered for a moment that this was how it was supposed to be, but decided that couldn't possibly be the case as there would be no reason to have four different versions.