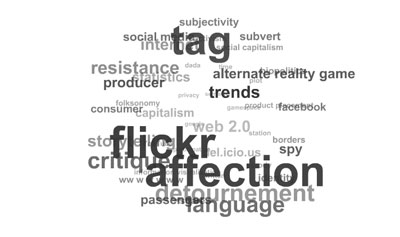 The National Museum of Contemporary Art (EMST) in Athens, Greece, has committed itself to curating a number of recent exhibitions of internet art. Their current show, "Tag Ties and Affective Spies," features contributions from both net vets and emerging surfers, including Christophe Bruno, Gregory Chatonsky, Paolo Cirio, JODI, Jonathan Harris and Sep Kamvar, Les Liens Invisibles, Personal Cinema and The Erasers, Ramsay Stirling, and Wayne Clements. The online exhibition takes an antagonistic approach to Web 2.0, citing a constant balance "between order and chaos, democracy and adhocracy." Curator Daphne Dragona raises the question of whether the social web is a preexisting platform on which people connect, or whether it is indeed constructed in the act of uploading, tagging, and disclosing previously private information about ourselves on sites like Flickr, YouTube, and Facebook. Dragona asks whether we are truly connecting and interacting, or merely broadcasting. While her curatorial statement doesn't address the issue directly, the show's title hints at the level of self-surveillance in play on these sites. Accordingly, many of the selected works take a critical, if not DIY, approach to the internet. The collective Les Liens Invisibles tends to create works that make an ironic mash-up of the often divergent mantras of tactical media, culture jamming, surrealism, and situationism. In their Subvertr, they encourage Flickr users to "subverTag" their posted images, creating an intentional disassociation between an image's content and its interpretion, with the aim of "breaking the strict rules of significance that characterize the mainstream collective imaginary..." JODI's work, Del.icio.us/ winning information (2008) exploits the limited stylistic parameters of the social bookmarking site. Using ASCII and Unicode page titles to form visual marks, a cryptic tag vocabulary, and a recursive taxonomy, their fun-to-follow site critiques the broader content of the web by crunching it through the filter of an open platform. The show has an obligatory tag cloud and, in true JODI style, this piece is tagged "del.icio.us, detournement, ww w w w w w." In a work that generated much discussion on Rhizome, earlier this year, Ramsay Stirling reminds us of the history of the relationship between viewers and electronic media. By adapting Richard Serra's and Carlotta Fay Schoolman's Television delivers people (1973), Stirling's Internet delivers people (2008) follows the hacker tradition of making only a few small modifications to the text to comment on the similarities and differences between producers, consumers, and products in the television and internet contexts. The exhibit is also accompanied by essays by Alessandro Ludovico on "Identity as a multilayered self in Web 2.0 environments" and Juan Martín Prada on "Forms of Resistance," who concludes that it may only be through that latter that we will "see what is truly 'social' about 'social media'." - Marisa Olson

The Web 2.0 is such a great source of inspiration! it is dynamic and ever changing. I like to see exhibitions on it. It is contemporary, it is now, it is everywhere.

By the way, check out the coming back of the Clubmaster Ray Ban sunglasses. They brought these back from the 80's and the original design inspiration is from the 50's. Quite interesting. Ray Ban Women's Sunglasses

Agreed. Without the web it will be impossibel to see such a great picture and in fact most people will never have a chance to have a look. Internet is one of the greatest invention of mankind.

I like the tag cloud that i have on my site but I think I will switch to this one, looks cooler.

I will for sure add one of these to my sites! Thanks for the idea!

I really like this tag cloud, it's very sexy. I don't use them on my sites yet because I've not understood how it benefits the reader other than visual impact, but I might add them now.

I love the tag cloud I always read them on every blog I go to. i think they are a gret addition.

Let's also not forget that such tags are extremely useful for SEO purposes as well. I think a tag could is great addition to any website!
married dating

That tag cloud is really effective for technical WP themes. My friend recommend me to use it. It is great though. For SEO? yes I know that the standard tags will do the SEO and of course this one is too.

I see tag clouds all over the web, but rarely do I actually use them. I understand they have a place, but in my surfing world, they could be left out.

I don't mind them as art though…Sarah

Hmmm.. I'm not an avid tag cloud user but tag cloud as art, why not?

This is great info. Im like April. Have not been an avid tag cloud user in the past, but Im warming up to the idea more and more. The tag clouds are pretty cool!

Internet art is something I am very interested on. I willl definitely apply.

And by the way, the Ludovico's work is amazing! you must experience it! ;)

Spam as legitimate comments, why not?

tags are funning and very handy)

Nice posted article you've shared to your readers like. By the way, at first i thought it was a dialect called like in one of the country in the asia but after reading i get to understand.

I will try the design on my website.
www.frankwollinger.de