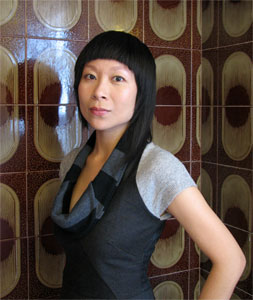 Astria Suparak took the position as Director at the Miller Gallery at Carnegie Mellon University in Spring 2008. This fall, she begins an ambitious calendar of exhibitions that includes a solo show by researcher-artist Julia Christensen and a retrospective of the prankster-politico collective, the Yes Men. Before this position and a stint at the Warehouse Gallery in Syracuse, Suparak developed her distinctive style as an independent curator; from 1998-2006, she created touring packages of emerging video and new media works and took them on the road, stopping at Museums, high schools, film festivals and dime stores, introducing audiences, mainly in North America and Europe, to a new generation of artists working with the moving image. One show was organized in collaboration with this interviewer entitled Elusive Quality. This interview took place over email before her fall calendar at the Miller Gallery began and sketches out a curatorial career that went from toting video and film prints in a suitcase to more rooted practice. - Lauren Cornell

LAUREN CORNELL: In the '90s, the globetrotting independent curator, bouncing from biennial to biennial, was something of a phenomenon. Your style of independent curating was noticeably different: your interest in emerging artists, non-traditional exhibition spaces and video and media art set you apart. Can you talk briefly about how and when exactly you became an independent curator?

ASTRIA SUPARAK: I started curating during my sophomore year as a drawing student at Pratt Institute. For me, this was as an alternative way to supplement my traditional art school education, share artwork, ideas, and perspectives, and increase the flow among campus, neighborhood, and city. After a couple years of running a weekly screening series with a student activities budget, and building up a great audience (people would come from as far away as Connecticut and New Jersey to see the shows, and this was Fort Greene in the 1990s!), other organizations and institutions asked me to create or present programs for them. My first tour was during my senior spring break, and by the time I graduated in 2000, I had already created shows for the Knitting Factory, New York Underground Film Festival, Joanie 4 Jackie (alternative distribution system for female moviemakers), WFMU, and Anthology Film Archives.

LC: Were there artists you were looking to at that time who were really pushing things forward? Or who you were following in particular?

LC: Your tours consisted of you and a suitcase full of videos and film prints that contained all the work, as I recall. There were always surprising aspects to these shows; I remember for your touring program "Let's Get Tested," you asked the audience to fill out open-ended surveys about sex and then shared the anonymous responses with the audience at the end of the night. Can you describe your curatorial practice at this time -- and now?

AS: My curatorial work is shaped by a combination of personal concerns, preoccupations, and geography, emerging cultural trends, and social issues. Before I started directing university art galleries a couple of years ago, I created exhibitions by request or on commission for particular audiences and venues. I would then broaden the viewership beyond that of the original museum, film festival, or university by touring the same work to dozens of alternative locations, like sports bars, church basements, artist collectives, and roller skating rinks. Early on, I was inspired by the traditions and exhibition patterns of underground music and experimental film. More and more, I'm trying to bring a grassroots philosophy into the institutional sphere. 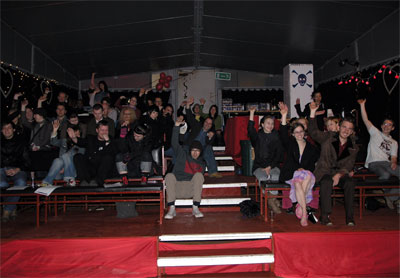 With "Let's get tested," the Oberhausen International Film Festival commissioned me to create a program about the future of cinema for the occasion of their 50th anniversary, in 2004. My programming reflected the increasing amount of collaboration among artists at that particular moment, from collective practice to micro-publishing to self-distribution. At the time I was focused on constructive engagement with the world, optimism as a coping mechanism, and breaking down boundaries (national, corporal, gender, historical). This extended to the presentation of "Let's Get Tested," and "Quantum Leaps" after that, and my relationship as a presenter to the audience. I wanted active participants, not passive film viewers. So, in the process of bringing those shows to dozens of cities, I would do a little data mining as part of the introduction, as you mentioned. At the end of the night I would share the information I had gathered. I would also set up mini exhibitions to accompany the screenings, including small publications (like LTTR and Lady Scientist) and silk-screened posters (from the Just Seeds cooperative), celebrating important groups and individuals in the struggle for social justice. 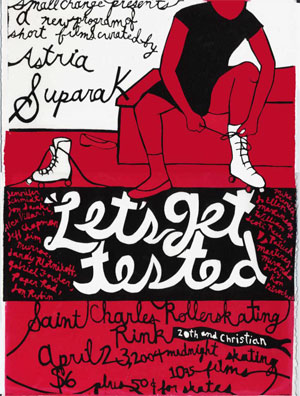 LC: Were you pulling in a lot of income in this line of work?

AS: Getting rich has never been a goal of mine, and I have gone apartment-less for stretches of time. I split my profits with all the artists, so a tour with three programs could mean like a 34-way split. On the low-end, we'd also be splitting income at the door with the venue/organizer (like a bar or club), I'd be sleeping on a stranger's kitchen floor, and hitching a ride to the next tour stop. On the high-end there'd be a handsome, set honorarium for each artist and curator, plus travel, hotel, meals, white doves in a cage on the patio. More often it was like the former, or somewhere in between. The plushest situations were in Europe, Canada, and East Coast universities.

LC: You always curated artists who were just starting out -- I know you saw a ton of work and also received tapes from artists around the world. How did you identify important work amidst this? And do you have a specific approach to curating media art? Has it changed now that you work in a gallery instead of many different kinds of theaters?

AS: I like to seamlessly incorporate moving image work into exhibitions, and not ghettoize it in separate, dedicated rooms. I think important work in this field both transcends its medium and embraces the characteristics that are specific to the medium. Personally, I don't have a checklist to determine importance. Concept tends to outweigh craft for me. But I also like work with experiential appeal, clarity of purpose, and depth, or elements that unfold over time.

LC: You're opening the Miller Gallery with ambitious shows on Julia Christensen and the Yes Men. Can you talk about how these shows set the stage for what you plan to accomplish at the gallery?

AS: I want to activate the space for a wide range of audiences, and to draw new visitors to the gallery. My first season in Pittsburgh touches upon many critical issues that impact our everyday lives: Julia Christensen has studied the effects of abandoned big box stores on communities across America, asking us to consider our future landscape before it's too late; The Yes Men have taken on the world's most powerful corporations and bureaucracies through a process they call "Identity Correction,"; "Signs of Change" chronicles 50 years of the cultural production of social movements, from the American Indian Movement to Women's Liberation, the South African Anti-Apartheid struggle to squatters. An ancillary goal is to explore how social forces shape new artistic forms, and vice versa.

LC: Tell me something unrelated to art. An ideal Sunday would consist of?

AS: Fresh food, leisurely sex, informative public radio, no deadlines, and something unexpected that blows my mind.