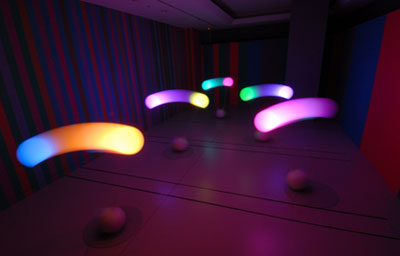 In it's 29th year as the one of the most important media arts festivals in the world, Ars Electronica 2008 focused on trying to make sense of the economic and social realities of a "knowledge-based" society, where limits of intellectual property and aging copyright laws are beginning to lose relevance in an increased international atmosphere of open systems, sharing information across networks, and collective artistic action and utility. This year's theme was "A New Cultural Economy", a vision of the present and future that imagined cultural and artistic exchange and remixing as a key indicator of the success of current and future generations. Through this 6 day festival, events ranged from conferences, exhibitions, performances, to student exhibitions such as a wide range of projects from the University of Tokyo entitled "Towards a New Horizon of Hybrid Art".

This year's symposium was curated by Ars Electronica stalwart and CEO of Creative Commons, Joichi Ito. Over the course of two days, the talks were split into 4 themes including "Production and Creation in the Commons", "Media, Fans and Copyright", "Science, Religion, Art, Literature and the Pursuit of the Truth", and "Politics and Collective Action in Modern Open Society". The main theme remained that the advent of the Internet and web 2.0 has changed the way that people access information resulting in new ways of formal expression through increasingly inexpensive innovation and increased access to the tools that enable its creation. Over the years, the festival has shown that the artists are the instigators who push technology beyond what the engineers may think is possible, and often break and change these systems to give us an idea of what the future might entail.

Theorist and author of The Wealth of Networks, Yochai Benkler opened the talks by positing the question of whether or not free culture can survive systemization. Since we no longer need to ask permission in order to act, this opens up a culture of self-reflectivity and convergence where we can easily change and influence people by combining different forms of media with collective viewpoints and perspectives. Following him, Tim Pritlove of the Chaos Computer Club in Berlin spoke about hacking and activism as an art form and the large urban displays created by the Chaos Computer Club that were intended as a platform for creative engagement with the public through the use of mobile devices. This theme involved the fact that art should not only focus on itself, but rather be something that allows and encourages contributions from the general public in order to enrich its scope and value. Michael Tiemann, representing Red Hat Linux and the open source community, spoke about music as a cultural artifact that can be transmitted across intellectual property lines.

The third day of the conference included Andrew Adam (AKMA) who spoke about the obscure convergence of theological publishing and technical innovation from a religious and scientific perspective. His talk centered around the transition from physical publishing to digital distribution and the phenomenon of "replacement panic" or the fear that future forms of digital media proliferation will supplant physical interaction. James Boyle from Duke University argued that people generally have a systematic bias against openness because we overestimate the threats and dangers of having completely open systems and that we understand the concept of closed systems more than open ones. Author David Weinberger then gave his opinion that the concept of "truth" in the age of information was noisy and difficult to assign any one definition. One of his examples included Encyclopedia Brittanica's attempt to discredit Wikipedia by stating that it was "noise" distracting people from their "product." Afterwards, my talk centered on open source media and territorial conquest of networks, where through presenting several of my projects, I examined how conflicts surrounding open and closed networks and their territorial control are causing rifts between community organizations and corporate networks inhabiting public spaces. Finally Ronaldo Lemos, director of the Center for Technology and Society at the Fundacao Getulio Vargas School of Law in Rio de Janeiro, Brazil, spoke about the proliferation of "Technobrega" music as a departure from the traditional copyright model where musicians are trading standard distribution models like labels and have partnered with street vendors and online "pirates" to get their music out to the larger population.

The next panel focused on politics and collective action in modern open society. Georgia Popplewell from Trinidad and Tobego spoke about "Global Voices", a non-profit organization that aggregates blogs around the world into a central portal site for citizen's media creation. Isaac Mao a blogger and co-founder of CNBlog.org in China spoke next about censorship on the net and the impossibility of implementing it given the speed of sharing information across the Internet. Also on the panel was NYC-based free culture advocate Elizabeth Stark, who spoke about copy and paste culture, the remixing of the "Amen Break" sample, and how free culture is not only for geeks and should be adopted into mainstream society. She also mentioned "YouTomb" a site that tracks the popular video site's removal of selected content in order to show how copyright is becoming an outdated method of control in the digital world. The final presentation on the panel was Jonathan McIntosh, an artist who remixes and deconstructs videos and commercials for political effect and to stage "virtual" protests about specific topics such as environmental concerns and other political issues. He showed a video remix of a Chevron advertisement which critiqued their environmental policies by intercutting clips of the violence resulting from territorial acquisition of natural resources such as oil fields. 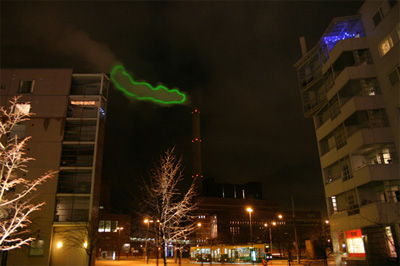 Moving away from the conference hall, the exhibition at the OK Center for Contemporary Art across town featured the honorable mentions and Prix winners for Digital Art. New Zealand born, Madrid-based artist, Julian Oliver's levelHead piece integrates an interactive narrative with ARToolkit marker imprinted cubes as the user interface of a game in which a character moves through a 3D space. Also in the exhibition was Golden NICA winner Image Fulgurator by Julius Von Bismark which is a device that physically manipulates photographs by implanting messages onto the object being photographed. The project senses if a camera's flash goes off and synchronizes a projection on the object being photographed at the same time. Also in the space was the winner of the NICA for Hybrid Art entitled Pollstream-Nuage Vert which consisted of a series of environmental art projects by the HeHe artist team that critically examined and highlighted the effect of pollution on both public and private spaces through public projections which illuminated pollution. Other interesting projects included Optical Tone by Tsutomu Mutoh of Japan that featured a small forest of anchored light emitting spheres that when tipped, changed the color and sound of the surrounding room. The work attempted to produce an abstract dialogue between each individual object and its use. Meanwhile over in the Brucknerhaus, the Open Frameworks lab brought artists, hackers, and programmers together into a small pre-fab structure where they produced projects together collaboratively and exhibited them on screens at the bottom level of the lab. By placing artists themselves into the spotlight, this unique format emphasized process over the final product or art piece.

As the final weekend wrapped up, there seemed to be great anticipation for next year's festival when the city of Linz will become Europe's capital of culture in 2009 (a position which rotates among European cities annually) and Ars Electronica will celebrate its 30th anniversary as the premiere media arts festival in the world. Also in January of 2009, the new addition to the Ars Electronica center building will be opened which includes a large new studio and residency space for artists as well as an augmented exhibition hall for future festivals and support a year-long rotating exhibition schedule. Throughout the past few days, the discussions and arguments that surrounded the conferences and artists presentations were strong indicators that the field of media arts is still a growing and developing medium and one that will continue to inspire and challenge both artists and visitors to the festival for years to come.

Jonah Brucker-Cohen is a researcher, artist, and Ph.D. candidate as an HEA MMRP (Multimedia Research Programme) fellow in the Disruptive Design Team of the Networking and Telecommunications Research Group (NTRG), Trinity College Dublin. He is an adjunct assistant professor of communications at NYU's Interactive Telecommunications Program (ITP). He is co-founder of the Dublin Art and Technology Association (DATA Group) and a recipient of the ARANEUM Prize sponsored by the Spanish Ministry of Art, Science and Technology and Fundacion ARCO. His writing has appeared in numerous international publications including WIRED Magazine, Make Magazine, Rhizome.org, and Gizmodo, and his work has been shown at events such as DEAF (03,04), Art Futura (04), SIGGRAPH (00,05), UBICOMP (02,03,04), CHI (04,06) Transmediale (02,04,08), NIME (07), ISEA (02,04,06), Institute of Contemporary Art in London (04), Whitney Museum of American Art's ArtPort (03), Ars Electronica (02,04,08), Chelsea Art Museum, ZKM Museum of Contemporary Art (04-5),Museum of Modern Art (MOMA - NYC)(2008), and the San Francisco Museum of Modern Art (SFMOMA) (2008). He blogs at coin-operated.

great report, Johan. it's not that surprising that this year's theme on ars electronica was intellectual property, actually, i find it very pertinent for the years and arts to come.

i must say that Elizabeth Stark that you mentioned is not the same as the author of that blog [elizabethstark.com]. as i started reading i was thinking "is she a writer too?" and "but.. children?" and then i realised they just happen to have the same name. haha. as far as i know, elizabeth here is the one behind freeculture.org, which makes a lot more sense ;)