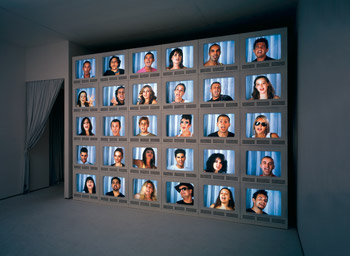 On October 29th, the new Temporäre Kunsthalle will open in Berlin, making the city even more of an international art mecca. Their inaugural exhibition features four ambitious multi-channel video installations by Berlin-based artist Candice Breitz. The show will open in two waves, beginning with her installations Working Class Hero (A Portrait of John Lennon), King (A Portrait of Michael Jackson) and Queen (A Portrait of Madonna). In each of these pieces, fans of the musicians have been invited to sing entire albums by Madonna, Michael Jackson, and John Lennon. With each performance shot in precisely the same way, the resulting headshots are presented in the round, a circle of voices aimed at each other, almost duking it out for the title of ultimate spectator, in front of a perpetual blue screen that marks the whole thing as a production. While Breitz is often celebrated for her witty and clever embrace of pop culture, there is a deeper current to her work which revolves around close scrutiny of the relationship between the formation of celebrity at the hands of mass media and the role of these machinations in the culture industry. In these ways, her often autobiographical parodies of pop figures are not so different from the real thing--afterall, it's the idea of Madonna that we see in the media, more than Madonna herself. If a circle of people singing Madge's hits can constitute a "portrait" of her, it's because her image is best reflected in the way that consumers drink-up her message. Then again, this creates a nice tension in the new work Breitz will premiere in the second half of the show. Him + Her is a two channel project employing several decades' worth of found footage from the films of Jack Nicholson and Meryl Streep. Putting the fan-element aside, in the Him half, Nicholson faces off against 23 versions of himself, while the Her side features a melange of 28 Streeps. Arguably two of the most successful, famous American actors, their clips will speak directly to the paradox implied by the phrase "Jack Nicholson character," where that person's media persona, archetypal constructions, and efforts to play against type inevitably conflict to comprise the type of median impression visualized here. So ultimately, of course, the cycle is still completed by spectators, and Breitz fans are sure to applaud. - Marisa Olson