Sounds Across Town
By Marisa Olson 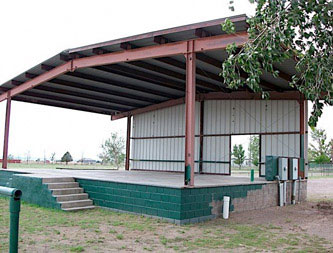 It would be hard to identify a small town with a bigger history than Marfa, Texas. This little desert town is an artistic oasis and has been a polestar for installation and land art (the Chinati and Judd Foundations reside here), the film community (many a major movie has been filmed here, including most recently No Country For Old Men), and enthusiasts of natural phenomena, for whom the Marfa Lights and Big Bend Natural Park create a mecca. Ballroom Marfa is a diamond in this dust bowl. While Marfa is often visited for its permanent installations, the organization presents temporary exhibitions of newer work by interesting artists from around the world. Their current show is co-organized by power house curators Regine Basha, Lucy Raven, and Rebecca Gates. Entitled "The Marfa Sessions," the show features fifteen artists -- five of whom are presenting original work -- who engage sound as a way to engage and transcend spaces. Rather than being confined to the gallery, their work broadcasts "sounds across town," as the exhibition subtitle advertises, nesting itself into the nooks and crannies of the tiny West Texas city. These artists are Emily Jacir, Nina Katchadourian, Christina Kubisch, Louise Lawler, Iñigo Manglano-Ovalle, Kaffe Matthews, Angel Nevarez & Valerie Tevere, Dario Robleto, Steve Roden & Stephen Vitiello, Steve Rowell & Simparch, Deborah Stratman & Steven Badgett, and Julianne Swartz. Many of them are well-known for their contributions to the field of sound art, while others are best-known for work in other media, which makes their participation in "The Marfa Sessions" so exciting. Their works and associated public programs and performances are documented on the show's blog, in the unfortunate event that you can't make it south in time. - Marisa Olson