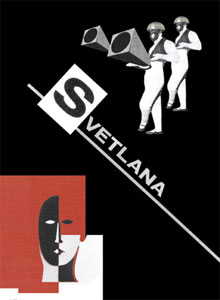 Opening this weekend at S1 Artspace, in Sheffield, "Svetlana" is the second project by Pil and Galia Kollectiv to draw inspiration from a work by Waw Pierogi. While Pierogi is best known as the founder of 1980s New Jersey-based synth outfit xex (and was only then known to a handful of obscurantists), he also concocted an unrealized, audio-visual homage to the asparagus ("Asparagus: A Horticultural Ballet") and an operatic account of Stalin's daughter, Svetlana, who twice defected from the Soviet Union. The scarce information available about each work lends particularly well to the Kollectiv's method of post-historical assemblage, predicated less on faithful recreation than on "the possibilities opened up by marrying the ideas left by yesterday's art movements." For "Svetlana," the Kollectiv strikes a Kittleresque pose, weaving its protagonist's life into an espionage epic involving Leon Theremin, the eponymous instrument's inventor later kidnapped by the KGB, and a plot to create sound weapons from the acoustic locators that preceded radar technology, but were subsequently used, as props, to conceal radar from the Germans. These elements visually coalesce in the form of fictional photo documentation of rehearsals for the opera, as well as location shots, all resembling a Bauhaus drama class and reminding viewers of one of many historical intersections between aesthetics and military technology. - Tyler Coburn