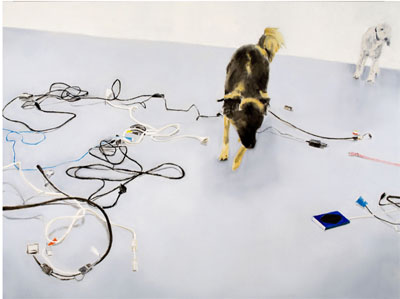 Donna Haraway once wrote, in her infamous "Cyborg Manifesto," of the idea that there were no separations between bodies and objects. Our life force flows through us and out into the objects we make, she reasoned; thus there ought to be no distinction between the so-called real or natural organisms that nature produces and the artificial machines that humans make. Her conclusion: We are all cyborgs. While this theory was developed prior to the internet's big boom (in 1991, presumably before the word "cyborg" took on the stale whiff it has now), and explicitly as a means of wresting feminism from the binary system in which she saw it entrenched, it turns out that it applies very well to the work of a net art boys club that calls themselves "Neenstars." In 2000 the group was so determined to set themselves apart from the existing paradigm of media art discourse that they hired a Silicon Valley branding firm to invent a new name for them and what they do. The resulting word, "Neen" has been used by the boys (and a few girls along the way) to refer to their work and practice, which revolves around replication and the exploration of an ever-upgraded series of machines. It's all spelled out in their manifesto, in which they say, "Our official theories about reality--quantum physics, etc.--prove that the taste of our life is the taste of a simulation. Machines help us feel comfortable with this condition: they simulate the simulation we call Nature." Open now at Brussels' think.21 Contemporary Gallery is a show of the work of Neen godfathers Andreas Angelidakis, Miltos Manetas, and Angelo Plessas. It won't surprise you that their work moves fluidly through media that includes paintings, web animations, photos, and architectural structures. More importantly, the artists situate their output in relation to the fluidity with which they move in and out of real and virtual spaces, jumping online and offline constantly and seamlessly. Their effort is to downplay the oft-hyped distinction between the real and the digital, arguing that the experience of both is all part of the same larger consciousness. With the title of the show, "Everyday Utopia," they at once dispel the myth of the digital utopia and make clear to those older generation critics still clinging to the false horizon of virtuality that the future is already here. - Marisa Olson