The Medium and Its Shadow: Reflecting on Recoded
By Finn Brunton

The Centre for Modern Thought at the University of Aberdeen hosted the conference, "Recoded: Landscapes and Politics of New Media" from 24th to the 26th of April 2008. Over three days, mediumistic questions and fantasies ran through the discussion, over the days and around them, talk of interfaces, transmitters, points between, avatars, nodes and graphs, spirits and phantoms and their interlocutors. From the first paper to the last was a meta-conversation: What do we mean by medium, media, new and old? This meta-inflection, as strange as taping yourself listening, became pervasive; even the hotel had a ghost. 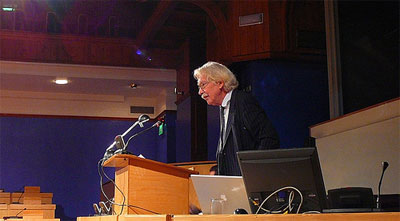 In his opening remarks, Friedrich Kittler raised the subject at the outset: we have only begun to think media, to consider the history of thinking it, here at the end of European metaphysics. He's speaking after Heidegger, the philosopher whose intensity of attention brought asphalt and reading glasses back into the discussion, the printing and the radio, the media which sustain philosophy and ontology themselves. For Kittler, Heidegger's attention opens the discussion again, after Aristotle, giving us a chance to redefine "media" and how we analyze it. His high-speed transit from Aristotle's discussion of sensory impressions to Heidegger in 1963 describes a history of applying heritage concepts of form and matter that make it easy for the European tradition to attend to the thought and forget the medium of the thought. At the end of European ontology, the logics of philosophy have been taken from "the Professor's chair" and instantiated in circuits, and this "end of philosophy is the task of thought." Kittler suggests new forms of analysis: "Technical media are the face of the moon whose dark side"--"that is Pink Floyd," he murmurs--"is technical mathematics and physics. To destroy the distinction of form and matter, we need to know how to read the technical architectures, the blueprints and the motherboards. We can look back to the whole recursive history of media theory, we could learn to spell out this new trinity of commands, addresses, and data, a new ontology of data." He expands this following a question from Mario Biagioli: To begin thinking from the basis of media, that is, processing, storing, and transmitting as the fundamental categories, rather than our inherited metaphysical arrangement.

Pause on that note, on processing, storing, transmitting, to trace another thread that starts with Kittler's talk: a theme of philosophical geometry. He presents a wonderful notion, a topological theory of stuff--Heidegger's "Thing Itself" essay, as Kittler reads it, has a mathematical theory of objects and their use. Heidegger discusses the importance for us of the fact that the amphora is a hole, something to fill with liquid for humans or the gods. Kittler laughs: "A geometry, the hole in a shoe or a glass, or a coffee cup, with a hole and a hole for a handle!" Later, Sha-Xin Wei will draw intersecting cones in describing Whitehead, and Ken Goldberg will consider the Reauleaux tetrahedron as a way of thinking about gathering places, the Heideggerian fourfold, in the drawing together of four spheres as the vertices of the tetrahedron.

But to resume: What are we talking about, talking of media? Medius, Goldberg considers, an intervening element; an idea, he argues, could be considered a medium as a telescope is, allowing new modes of perception. "All academics are involved in new media; we develop new models," he says, ending on a slide of his favorite tetrahedron, at the intersection of spheres. Xin Wei, drawing on his Topological Media Lab work, suggests that this intersection is about increasing the porosity between digital and analog modes, reflecting the continuous nature of embodied experience; Siegfried Zielinski, gripping the sides of the podium, announced that "I doubt the concept of media is of any value at this point." He presented medieval Islamic calculation devices, a Brecht radio opera with little distinction between man and apparatus, Jesuitical music-generating combinatorial systems in boxes, all towards the project of, in his term, a variantology, a way of approaching techniques of display and audition, calculation and arrangement, that sidesteps "media" entirely (arguing, at the close and magnificently, for the creation of "an Institute of Southern Modernities," or ISMs, to be based in Athens, Baghdad, Istanbul, Naples, outside the accepted arrangements of media and modernity). 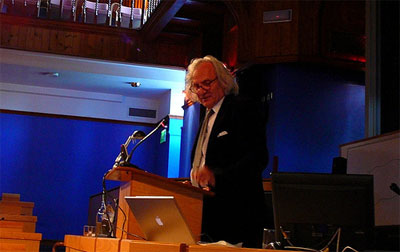 A specter is haunting this spectrum of opinions: a medium, after all, speaks for spirits. At the séance, she or he's a channel, a live transmitter. Ghosts and phantoms made their way through paragraphs as through walls. For Colin Milburn, the history of nanotechnology--indeed, elements in the larger history of chemistry--is woven into the history of imaginative projection into extremely small spaces, which he calls nanomorphosis, placing an "avatar" on the scale of cells, molecules, nanites. It's a study of the imagination in scientific and technical practice, and Milburn brings up Madame Blavatsky, the founder of Theosophy and a medium for ghosts, powers, and Ascended Masters of all kinds, who described her mystical nano-scale adventures, inspiring science fiction writers who in turn inspired engineers. Kriss Ravetto presented a very different kind of dislocating phantom presence, analyzing the work of Rafael Lozano-Hemmer in the light, or shadow, of Freud's uncanny. An artwork where people's shadows are suddenly inhabited by other (pre-recorded) people provokes a reflection on a new and temporally disturbed unheimlichkeit of knowing that the system is always one step ahead of your response to it: periodically, the artwork resets, and the tracking grid is visible across the public square. The medium appears briefly as itself, projecting itself. For Brian Rotman, that moment of self-reflexivity on the part of the medium is an aspect of how "the virtual" takes place, which he compares to the "the being and nonbeing of ghosts": from the voice of the Old Testament God that speaks in writing, to money pricing itself and its own volatility in modern financial markets, the elusiveness of things which reflect on their own transitivity, "becoming beside oneself." Artist Trevor Paglen discussed the nebulous condition of "black budget" projects in the U.S. military and intelligence community, which he has documented with airplane flight logs, amateur satellite tracking, military patch collections, and very, very long-range photography. His photographs and artwork document ghostly traces (heat-blurred installations, lines of light in the night sky) and some very real abuses of power, like the "extreme rendition" flights. These themes were also taken up by a screening of Peter Galison's documentary, Secrecy, a study of how modern government became a system for creating classified information, and the pursuit of some people and events that have been made very phantomic indeed.

A medium is also a place where people gather, and share time. They can learn there; Tim Lenoir presented his work on "serious games," "recycling" the video game technology from the world of military simulation to produce training environments for negotiation and conflict resolution in different real-world global conflicts. They can share and distribute--Thomas Keenan considered the phenomenon of jihadi video, "not only an event that's televised, but an event that happens because the cameras are there." We need "a new politics of television, and a new new politics of the Internet." Groups of people and the connections between them concerned Eugene Thacker under the larger rubric of "dispersive" models of activity enabled by new media, which he broke into three areas: the network, the swarm, and the multitude. Presenting a critique of the limitations and internal contradictions of each, he made the case that these models re-enact the ancient philosophical distinction between "immanence" and "life," "living things" and "Life as such," with their many individuals and ontologically emergent "whole," univocal and self-organizing, and suggest a project for further thought. Julia Scher, presenting materials from her classes, suggested a deeper exploration of how social spaces and technical media interact; Sande Cohen argued that our conceptual inconsistencies about the media techniques we adopt are having grave and unwelcome consequences for how we conduct our culture, and particularly our universities. For Régine Debatty, one consquence of these technologies is simply that everyone can do surveillance now, from governments to businesses to Gawker Stalker; we're all in on the practice, sometimes without realizing it. (Skùta Helgason's art installation, "Happy Feet," turned surveillance on its head by observing only the feet of passers-by, leaving their faces unseen.) Tangled in many the talks are issues of time and duration--the multiplayer interactions of Lenoir's environments, the immediacy of Keenan's analysis ("I'm trying to only discuss videos that have been uploaded in the last 24 hours"), the uncanny, apprehensive time of Ravetto's study--and Mark Hansen closed the conference with a consideration of questions of "the 'digital' in digital cinema" by looking at the different ways time is handled in cinema and digital technics, with new durations being explored in runthroughs and artworks that start from the pixel rather than the frame. 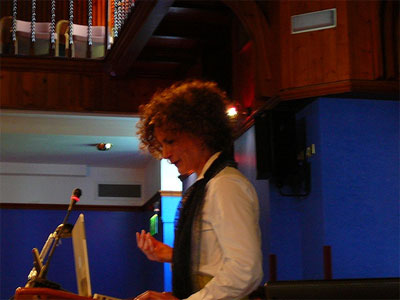 This look at the conference, built around words, ends with words in code and in text. Wendy Hui Kyong Chun, working at "the bleeding edge of obsolence," explored the problematic word "memory" in computation's history, from its beginnings in the overlap of speculative models of the human mind and the construction of computers to the present "enduring ephemeral" condition of the Web--in the process, shifting the question from what new media is to what it was, and what it might become. Laura Marks presented examples from Islamic calligraphy and metalwork alongside code art to describe a model of "experience, information and image," words becoming figural form: "Art forms that exist as information, unfolding into the perceptible only with difficulty." Kufic calligraphy flowering with latent meaning, algorithms blooming into figures. Alexander Galloway, taking up the issue of code, argued for "alternative algorithms," "an anti-history of function waiting to be built," which could explore deeply different approaches to programming that could oppose current models of opaque utility, a new inflection to the medium made of alternative logical formations, systems of contagion, Sophist syllogisms, and a "phenomenological programming" approach.

Finn Brunton is a PhD student at the Centre for Modern Thought. He is currently working on a dissertation on the social and technical history of spam, and some related programming and design projects on cultural histories of computation. He helped organize the 2008 Recoded conference and he blogs at fastacting.