The Tomorrow People
By Ed Halter 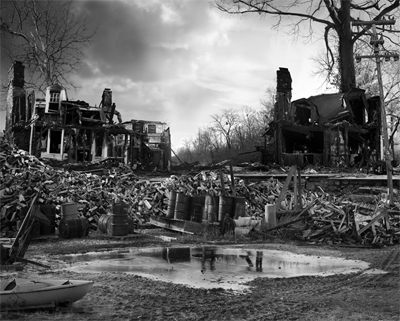 In his 1971 essay on post-Holocaust culture "In Bluebeard's Castle," George Steiner notes that in nineteenth-century Europe "an odd school of painting develops: pictures of London, Paris, or Berlin seen as colossal ruins, famous landmarks burnt, eviscerated, or located in weird emptiness among charred stumps and dead water." Comparing these visions to 20th century photographs of war-ravaged Warsaw and Dresden, he wonders "how strong a part of wish-fulfillment there was in these nineteenth-century intimations." Or self-criticism: Gustav Doré and Blanchard Jerrold's 1872 book London: A Pilgrimage depicts a dark metropolis teeming with the bodies of the poor, then ends with an eerily serene image of a future London, crumbling and overgrown like the remains of ancient Rome-- a urban memento mori. One recalls these European precedents while viewing the exhibit "AMERIKA: Back to the Future" at Postmasters Gallery in New York; the key to this tightly composed set of works lies in Jennifer and Kevin McCoy's Big Box (biosphere), a set of two miniature suburban landscapes. Each one depicts a typical American shopping mall, comprised of the facades of familiar chain stores and restaurants-- Chili's, Target, Bed Bath & Beyond, The Sports Authority and so on-- reconfigured into a circular structure that slowly rotates on a mechanical table (the exact order of the businesses taken directly from a specific mall in Nyack, New York). Tiny cameras feed live images to screens above, enlarging the scale models to strangely lifelike dimensions. In one part of the installation, the mall includes a mesh-wire dome at its center, overgrown with green moss and trees, with small plots of vegetables and flowers planted outside. In the other, the same structure, now hollow at its center, is burned and crumbling, surrounded by bloodstained human figures; letters have been torn off of logos to form a new sign reading HELP US. The rest of the exhibit also feels like looking back on the ruins of contemporary America from the future: Marcus Kenney's paintings employ bricolages of old store receipts and product packaging, Anthony Goicolia's spooky large-scale black-and-white photographs show what appear to be sites of post-industrial destruction, and David Herbert's retro-primitivist sculptures reconfigure 20th century icons (Mickey Mouse, the Starship Enterprise) as crudely constructed stone-age totems--perhaps to serve as fetishes for the superstitions of future generations, huddling in the ruins of shopping malls as they dimly remember the American century. - Ed Halter

cause that show was awesome.
One of the main enemies was a swarm of killer bees.

But ya, this is good too.

Yes that is exactly what I meant.

But this works too, with additional layers of meaning in its multiple transfers:

I think this image is very alluring. There is something so gloomy about it but at the same time it's beautiful! I really like the water puddle in the foreground as it reflects everything in the background. Very cool!

I also think that this image could be symbolic of so many things like our current economic state!

Maybe it's symbolizing the state of today's housing market.