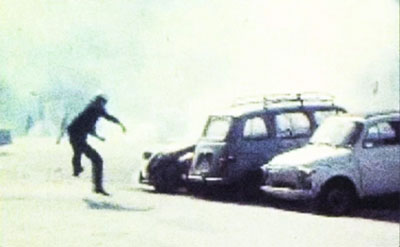 Wisconsin-based media artist Sabine Gruffat is kicking up quite a storm at Deadtech with her current installation, 24 Hour Riot, running through Tuesday, April 15th - an impressive fact, given the Chicago gallery's reputation for boundary-pushing fare. Gruffat has outfitted the space with a responsive array of electronic noise machines and televised riot scenes, such that a viewer's movement randomly triggers disturbances in the video and soundtrack. The effect is one of total dislocation, as our arbitrary influence on these broadcasts generates a palpable awareness of the existing gaps between politics, mass-media, and spectatorship. On this level, 24 Hour Riot continues Gruffat's extensive look at the various, mobile units of the culture industry and provisionally asks the question of how the reality of our contemporary, mediatized lifestyle may actually provide a groundwork for new modes of political engagement. As with Head Lines: Hybrid Film Trilogy (2007), in which the artist ran New York Times articles through semi-automated, recombinatory processes to produce skittery, 16mm animations, 24 Hour Riot suggests that any program of change must first arise from a greater understanding of the normativized codes of information dispersal, and of the means by which said codes may be subverted, erased, or reassembled. - Tyler Coburn