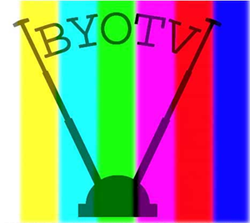 In February of 2009, the US will force a mandatory end to analog television broadcasts, in a regulated move towards digital upgrade. The shift will ultimately generate an enormous amount of e-waste when old monitors are discarded as useless. Portland-based artists, The Video Gentlemen, wonder, "What residue, ghost-images, or other artifacts will persist in the nooks and crannies of this technocultural turn-over?" They've organized an exhibition, in their city's New American Art Union, to anticipate the theme of the afterlife of "dead media." From March 19-April 27, "BYOTV" will be the preemptive channel for "a series of audio-visual works, presentations, performances, workshops, and panels that remix, retell, reimagine, rewire, and/or reclaim electromagnetic modes of cultural production." The gallery will beam with single-channel broadcasts by over forty artists, including Video Gentlemen collaborators Carl Diehl, Jesse England, and Mack McFarland; Amy Alexander, Craig Baldwin, and Nerve Theory; plus a special program curated by transmission arts organization Free103Point9, which includes 31 Down, The Dust Dive, Tianna Kennedy, LoVid, Todd Merrell, ben owen, and Tom Roe. (The entire program can be found here in PDF format.) Together, these artists' low wattage output will emanate from a variety of seemingly defunct sources, so that unlike a traditional exhibition, viewers don't see TVs passively displaying videos, but instead must play an active role in picking up the signals by bringing their own TV--hence the show's title. This reduction of telecommunication to such a small space and limited time forces viewers to get intimate with the medium, while considering its pending obsolescence. - Marisa Olson