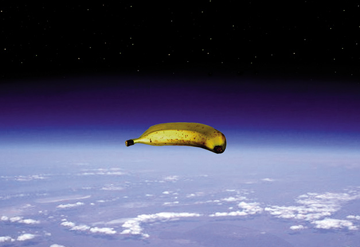 Montreal-based artist Cesar Saez has an interesting labor of love. He wants to launch a Geostationary Banana Over Texas. For three years, he's been researching the technology to do so and he's now ready to begin fabrication. All that stands between him and his dream is a fundraising goal of $1.5 million. Once launched, Texans will look up to see a banana that appears to be one-tenth the size of the moon. The 1000-foot, fruit-like assemblage will be composed of bamboo and balsa wood and will run on hot air, much like a blimp. Saez says he wants to think about space as a "canvas for expression" and to explore "territory as sovereign within the social context of today's global society." The territory of which he speaks is not simply Texas air space, it's the space for technological research into aeronautics currently "monopolized by wealthy governments and large corporations." In some ways, the artist likens himself to a cowboy, defiantly sending a rather phallic foreign object (bananas don't grow in Texas) into an orbital pattern above a state marked by a legacy of corporate pollution. Though Saez admits that the banana, itself, is simply and "oddity with a sense of humor," he's hoping that this intentionally "unthreatening intervention" can appear like a message in the sky to inspire community growth. In many ways, Saez's banana is just an arbitrary symbol for something much bigger than itself. His development process is one that has involved far-ranging and ground-breaking collaboration between artists, researchers, and locals. He hopes that the next step, after this major DIY feat is accomplished, will be regional community members stepping up to create their own DIY communication networks, allowing them to evade profit structures in "monitoring forest fires, the weather, or rescue operations." Meanwhile, speaking of money, if you're falling for the floating banana idea, you can contribute to the GBOT People's Campaign. Saez offers a money-back guarantee. If he doesn't raise enough to complete the project, he'll reimburse everyone. Personally, I'm hoping he gets it off the ground. - Marisa Olson

He should launch it over Montreal where he can see it if it will be so pretty. WHy on earth would we want to open up space for expression and art? That will only pave the way for marketers. And then we won't be able to escape these messages even if we retreat to the mountains (or the Hill Country, in the case of Texas) for a break from the bombardment. As imaginative and quirky as this idea is, it seems wrong wrong wrong to me.

why not use the $1.5 million to donate to schools, social infrastructure, etc. instead of spending it to launch a banal banana?