Guided by Voices
By Rhizome 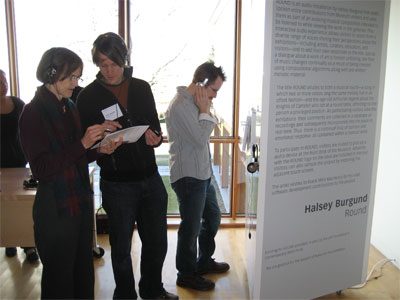 A new project by musician Halsey Burgund "ROUND" (2008) takes its cue from the enormous cultural influence of crowdsourcing and applies it to the musty old format of museum audio tours. On display at Connecticut's Aldrich Contemporary Art Museum, ROUND allows visitors to record their candid reactions to the artworks as they stroll around the exhibitions. Accompanied by Burgund's music, their recordings become fodder for future audio tours, which can be individually customized to feature the voices of curators, artists, or ordinary children or adult museum-goers. The title "ROUND" is a reference both to the notion of a round table where all voices count equally and the musical term for overlapping voices in song. Burgund remarked that the "static and off-putting" voice used in traditional audio tours conveys and enacts an art institution's monolithic voice of authority. ROUND's goal is to "make the audio tour participatory and take it outside the sanctioned voice. It's to encourage people to express themselves," he added. A kiosk provides an introduction to ROUND; nearby, visitors check out small wireless tablet computers before wandering about the museum, listening to audio tours or switching to adding their own vocal reactions to the works on display. Software developer and system designer Mike MacHenry provided technical help in creating the system, which is coded in Python with the use of audiovisual library GStreamer; the tablets run on maemo. The system also depends on Ableton Live and on custom Max/MSP patches and plug-ins, which create the compositional algorithms that generate and randomize the music, as well as effects such as timing speech to the rhythm of the music. The experiment appears to be a resounding success - some 120 people recorded their impressions during the opening on Sunday. In addition to comments about current exhibitions such as Charlotte Schultz's "An Insufficiency in Our Screens," Burgund and MacHenry also received some valuable feedback about ROUND itself: One user complained that the 30 seconds allotted for recording was too short. The comment suggests that visitors are eager to share their ideas within this platform, and would like an even greater opportunity to participate. - Lisa Delgado
Image: Halsey Burgund, ROUND, 2008 (Photo by Laura Duncan)