The Enlightenment
By Ed Halter 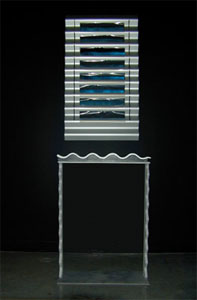 In Understanding Media: The Extensions of Man, McLuhan famously used the content-less light bulb to explain his philosophical slogan "the medium is the message," noting that switching one on "creates an environment by its mere presence." Now Pixel Gallery, in the techno-sage's old stomping grounds of Toronto, showcases two projects that create light-environments from two unusual technologies that go way beyond the bulb; the show, "Living Light," co-presented by Year Zero One for the Subtle Technologies Festival, continues until June 15. Diane Willow's Cascade and Circling, part of her Light Sensitive series, consists of installations employing sea water inhabited by bioluminescent algae. Visitors can touch the sculptures, prompting the liquid in the containers to move and create varying fields of luminance as the clouds of microorganisms shift. French Canadian collective Experientiae Electricae offers a differently volumetric experience with Pixy, which uses electroluminescence to generate light from a variable system of large, independently movable square sheets. Positioned and programmed, each square then corresponds to an individual pixel of a video, and can be spread over objects to create large, three-dimensional, low-resolution images. Pixy expands moving-image video into an architectural space, thereby throwing a few more twists into McLuhan's elucidations of technology's form-content problem. - Ed Halter

About enlighment, u should check the story about 'Group de
Recherches d'Art Visuel'
c: Burnham
I guess you still don't get what is at work here.

Rather than simply stating that I don't get what is at work here, why don't you enlighten the rest of us as to what those aspects are that I'm not getting?

I am sure any exhibit could be positioned historically or theoretically in any number of ways, and we'd love to hear your take on this.

…and if you're referring to Burnham's System Esthetics

Then sure, I could have mentioned this, but I'm not convinced invoking one 1960s thinker instead of another is necessarily deficient.

With response to not citing GRAV—again, this could have been an interesting comparison, but the use of light in an architectural/sculptural sense has occurred at many moments. I could just have well have mentioned James Turrell, Luis Recoder and Sandra Gibson, Anthony McCall, etc.

But you bring up an interesting point of context for this show.

It certainly is an interesting concept and opens the mind.

Total bunk! You are all willing and happy participants of this consumer based petro-chemical radio-active corporate age. Therefore guilty of contributing to the demise of an otherwise pristene planet. We are the plague! We are the Virus! We homo-sapiens. We are destroying our planet, So far no-one has convinced the Elite the wealthy the powerful they are wrong. So lets get on with it. THE END of THE WORLD and our species. Hopefully we will not be successfull in sending our species to colonize other planets in the universe and spread this gross missunderstanding of use of a planet and it's natural resources. OIL should have never been taken out of the ground! radio-active technology used. We are fools and we are doomed! babylon john( john mcardle) 11:45 am Thursday October 21st 2010.