Santana Row in San Jose is a kind of holy grail of large-scale property development, combining dining, shopping, and living space in a complex the size of several city blocks. Yesterday at lunchtime, it was bustling with row upon row of restaurant-goers sitting at tables on the sidewalk in the June sun. Imagine, if you can, Paris in the springtime with cheerful waitstaff and ample parking.

For the next few weeks, this terrestrial utopia will play host to RainDance, an outdoor installation by artist Paul DeMarinis. The piece, which somewhat resembles a shower facility, consists of five jets of water streaming downwards onto a raised walkway. Visitors walk under each stream while holding a plastic umbrella supplied by the attendant on duty. When the water hits the taut plastic, it creates a musical composition, generating different notes as the speed of water flow varies. Because the piece is inaudible until a visitor enters, it has a magical quality which was not lost on the shoppers and passersby who happened upon the piece. 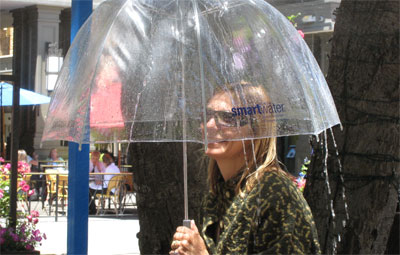 I left Santana Row for the Tech Museum of Innovation, where I saw 01SJ Global Youth Voices, an exhibition produced by Liz Slagus of Eyebeam. Inspired by 2007 Nobel prize-winner Muhammad Yunus' approach to micro-finance, the program had offered $500 grants to artists all over the world aged 11 to 21. Interactive artworks made by 12-year olds from the Nueve School in Hillsborough, CA sat alongside a video tour of Kibera, Africa's largest slum. "It's an impressive amount of work for twenty grand," Graham Harwood commented to me. It's true -- except according to a quick calculation ($500 x 17 artists), the actual figure was much less than 20. In the micro-finance model, even a small loan can change someone's life if it is provided at the right time, and in the right manner. It would be interesting to know whether this project offered a similarly profound transformative potential for any of its participants.

My last stop as I left San Jose was Discovery Park, where I saw Peter Hudson's Homouroboros, which may be the largest 3D zoetrope ever built, standing 24 feet tall. As a stroboscopic light flashes, life-size stuffed monkeys appear to be swinging from branches and eating apples from a serpent-like hand. The gaggle of families that surrounded it were suitably impressed. 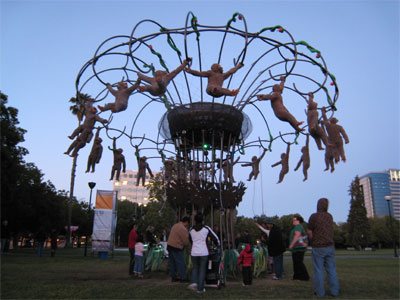 Homouroboros came to 01SJ from Burning Man Festival, and as I watched Hudson's moving monkeys I couldn't help but think about the comparisons between the two events. Some people say that Burning Man is an important cultural event, but I still think of it as superficial and anti-intellectual. What Burning Man does have, though, is the hive mind -- the collective intelligence that develops when festival participants immerse themselves together in a festival program. This is what was missing from my 01SJ experience this year -- after the opening on Wednesday, the social life of the festival felt dissipated. Bringing back the conference in 2010 would help; it might also help to include more work by young and emerging artists, who are more likely to commit the time and energy to have the full festival experience.

After the massive scale of ISEA/01SJ in 2006, this year's festival was about doing less, but doing it well. Still, it's safe to say that 01SJ is more ambitious and wide-ranging than any other new media festival in the US. If it can build on the successes of its first two editions under new Executive Director Joel Slayton, the 2010 installment may give Burning Man's hive mind -- if not its pyrotechnics -- a run for its money.

Michael Connor is an independent writer and curator. His most recent exhibition, the New Normal, is currently on view at Artists Space until June 21.