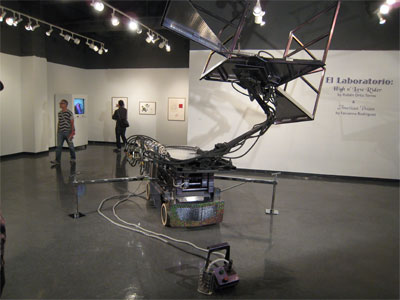 Day two of my San Jose experience began with a visit to MACLA to see High n' Low Rider by Rubén Ortiz-Torres, co-director of the 1995 film Frontierland. Using low rider-style hydraulics, Ortiz-Torres has customized a platform lift (normally used for high-level work on construction sites) so that it can not only be raised and lowered, but also unfolded, tilted, and spun like a pinwheel. Today, the High n' Low Rider merely sat still in the gallery space, but on Wednesday it came to life for the 01SJ opening night festivities, spinning wildly in the midst of a throng of people. I could only hope it wasn't a Decepticon.

From there, I continued on to Space 47, an independent project space that featured Floating Chronologies, a solo show by Jesus Aguilar. I last saw Aguilar's work at 01SJ in 2006, where he presented some promisingly clever pieces, including an instructional videotape that offered lessons in how to speak in binary language. For Floating Chronologies, the artist trawled the Internet to find other 'Jesus Aguilars.' Alan Berliner explored a similar line of inquiry in his 2001 film The Sweetest Sound, for which the director invited twelve other Alan Berliners from around the world to join him for dinner, but Aguilar approaches the concept in a different way. In this body of work, information about other people who share the artist's name is assimilated into a single hybrid character. We learn that this composite character earned a bronze medal at the 1980 Olympics, won the 1978 World Cup, earned a Ph.D. in philosophy, and shot a police officer in the leg. By combining these stray online facts under the umbrella of a single identity, Aguilar's piece creates a comical impossibility, but also draws a poignant connection between people of radically different walks of life. In the Google age, a name is never just a name. 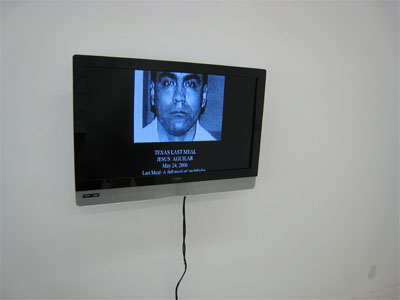 After taking in half of the Future Films program (more on that tomorrow), I headed to a talk by Stewart Brand, co-founder of the Whole Earth 'Lectronic Link and the Long Now Foundation. In his talk, titled "City Planets," Brand talked about the global population shift from rural to urban areas over the past two hundred years, and how this might offer new opportunities to address environmental and social problems. He argued for the importance of "slow" thinking when it comes to developing thriving cities, showing a number of striking images, including aerial photographs of cities just after they had been struck by natural disasters. In each of the images, every new building had been leveled by earthquake or tsunami, and the only structures still standing were ancient mosques.

As dusk fell, I made my way to San Jose City Hall to see Craig Walsh's video installation Incursion 37:20:15.71" N - 121: 53:09.51" W. The piece was projected onto large windows on two levels of the circular buiding. At 9PM, what looked like a colony of brightly-colored alien sea anemone began to grow from the base of the building upwards, eventually filling both levels of windows. The illusion was quite convincing, and it seemed that Richard Meier's rotunda would soon succumb to invading invertebrates. 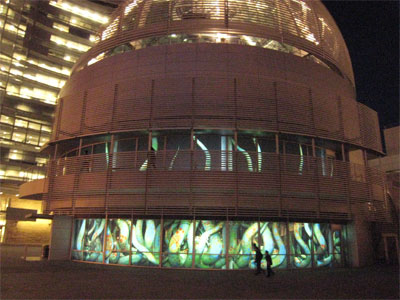 I made a final stop at another installation in which San Jose architecture was reclaimed by nature, Marina Zurkow's remarkable new work Paradoxical Sleep. The piece is a departure from the colorful, character-based animation for which Zurkow is known. For this new site specific work, Zurkow created a multi-channel video piece that shows water flowing rapidly through the stark spaces of the vast San Jose Convention Center. This work is displayed throughout the building on flat-screen monitors and plasma displays, giving visitors the impression that they are watching live CCTV images of the building filling slowly with the rising waters of the nearby Guadalupe River. Interestingly, though, the flood doesn't feel at all like a natural disaster; the flowing water and the architecture seem to belong together perfectly, as if the Convention Center had been designed for this exact purpose. 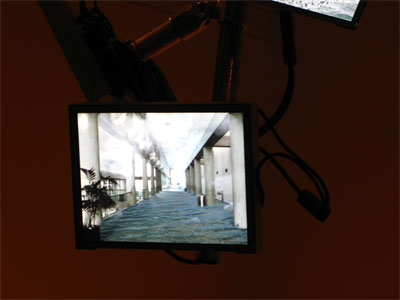