Editor's Note: Over the next few days, curator Michael Connor will report from the 01SJ Festival taking place this week in San Jose, CA.

When I arrived in San Jose yesterday for the opening of 01SJ, I couldn't help but feel that this would be a defining year for the biennial festival of "Art on the Edge." The festival was launched in 2006 alongside the itinerant ISEA conference, and I was eager to see how 01SJ would take shape without its more established partner. For 01SJ, based in the heart of Silicon Valley, building local audiences depends on presenting programs that resonate with the tech-savvy, while cultivating their interest in contemporary art.

Last night was the official opening of the Superlight exhibition at the San Jose Museum of Art, a central component of the 01SJ program. In his opening remarks at the exhibition, Artistic Director Steve Dietz addressed this challenge explicitly, reinforcing the point that the festival is bringing together the "so-called contemporary art world" with the "so-called new media art world." This relationship was played out in various ways through recent artworks that offer political and personal responses to a world riven by seemingly intractable problems. 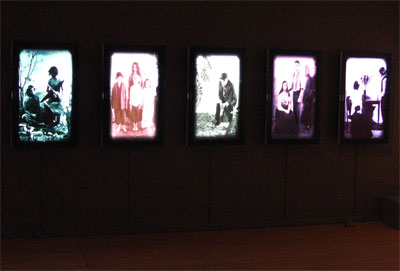 Talented newcomer Genevieve Grieves addresses the history of Indigenous representation in Australia in her piece Picturing the Old People. For this body of work, Grieves researched 19th-century photographs held in the collection of the State Library of Victoria. She identified particular motifs that ran through many of these photographs, such as romanticized images of the "noble savage" to the allure of the "exotic woman." She created five video portraits modeled after these archetypal motifs, in which the subjects occasionally come to life to enact their suppressed desires. In the video entitled Warrior, a man in a bowler hat shows his Indigenous subject the correct way to hold a spear. The recreated action comes off as slightly slapstick, but many ostensibly empirical ethnographic photos of the time were equally artificial. Given that California audiences are largely unfamiliar with this history, it might have been effective to present this installation along with a selection of the original photographs that inspired the piece; nevertheless, it was still highly engaging. 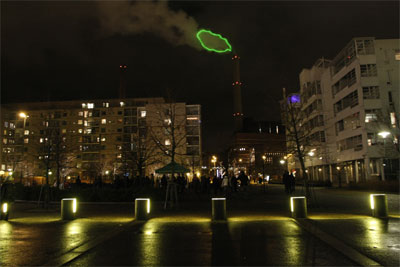 Nuage Vert by Helen Evans and Heiko Hansen offers a aesthetic intervention into the looming catastrophe of climate change. The original work took place in February, 2008, in Helsinki, Finland, where the artists projected the outline of a green cloud onto the emissions from a coal mine. The size of this artwork would increase when local residents used less electricity. In the video documentation presented in the gallery, the artists explain that they are fascinated by clouds, because of their movement and beauty, and because of their changing ideological significance (from a sign of economic prosperity in the 19th century to a sign of ecological crisis today). They describe their piece as an attempt to circumvent this clear-cut ideology and present the cloud as an ambiguous, aesthetic object. 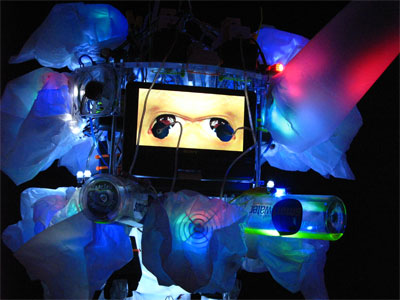 A more fantastical response to climate change was hinted at in the installation Twilight Zone by Shih Chieh Huang, in which mechanical sea creatures covered with trash-bag lungs, day-glo paint, and plastic bottles move and breathe hypnotically. In no way does this ecosystem seem natural, but it does seem definitively benevolent.

After leaving the San Jose Museum of Art, I headed over to the Hotel Montgomery, where Creative Capital were hosting a reception for 01SJ artists whose work they support. As I was leaving, I spoke to Eddo Stern, who had just finished installing a two-ton outdoor installation of his piece Portal, Wormhole, Flythrough. It was installed on the campus quad of San Jose State University, and Eddo -- slightly nervous about the deleterious effects that the campus sprinkler system might have on his video projector -- urged me to go see the piece right away. 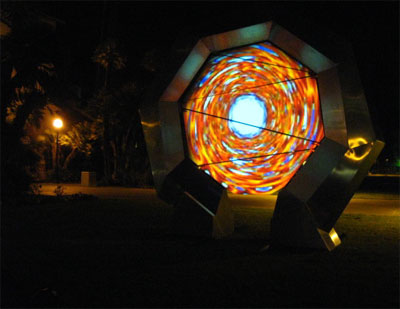 Portal, Wormhole, Flythrough is composed of video clips found online that seem to visualize transitions between dimensions. The clips, characterized by strobing and kaleidoscopic effects, have an amateurish quality that Stern works against by presenting them at large scale on a wormhole-shaped projection screen. I'd seen the work before at Postmasters Gallery, but the new context and installation lent it a new sense of drama, and also made it seem strangely at home. Given the late hour, one might be excused for thinking that a window to another dimension might really be found looming cartoonishly from a manicured lawn in the heart of Silicon Valley.