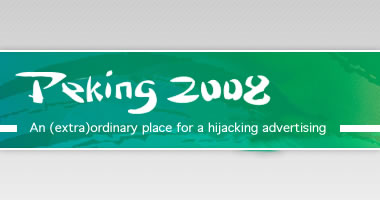 In the days of DIY online publishing, what we once knew as agitprop has increasingly taken the form of parasitic media. In such projects, activists leech qualities from the web presence of the host they intend to critique and use these visual resemblances (logos, site maps, page layouts, even URLs) to mimic their opponent in parallel sites that shoot off rather rhizomatically. Like a scientific parasite, the activist lives off the host, but what really thrives is the self-referential critique enabled by this form of parody. The Italian collective, Les Liens Invisibles, excels at initiatives such as these. In their open source project, Fake is a Fake, they make it easy for internet users with access to free Word Press blogging software to mimic high profile sites like news and government agencies, while inserting their own statements. "If at one time or another in your life you wanted to speak with 'the master's voice,'" they say, "then you are ready for our brand new fake-publishing services!" Constantly updated and refined by a group of devoted developers, the list of available spoofs continues to grow. Their most recent (ironically credited to Luther Blissett, the open source nom de plume--taken from the given name of a Jamaican footballer--originated in Italy for hundreds of worldwide activists) uses the upcoming games in Beijing as a backdrop for discussing China's attitude towards human rights. In the announcement of the Peking 2008 site, they declared, "While the Olympic curtain softly falls on the Chinese repression in Tibet, the imaginary art-group Les Liens Invisibles celebrates the upcoming Olympic Games with a new fake-based hybridation between art, activism, and advertising strategies." The ubiquity and recognizability of branded messages make them particularly vulnerable to such forms of plagiarism. The artists' disclaimer for Fake is a Fake explains: "Fake means not real. In this sense, all forms of representation, all forms of narration of the Real are based on overblown mechanisms of falsity and illusion." Acting much like the voice pumped through the loudspeakers at a sporting event, the "goaaallllll" of these projects is not to turn down the voice of "the master," but to amplify a problem to such a volume as to expose its inherent flaws. Thus, Peking 2008 is yet another important contribution to the field of sports-related activist art projects that demonstrate that playing by the rules can be an even more profound form of protest than breaking them. - Marisa Olson