Drawn Out Processes
By Marisa Olson 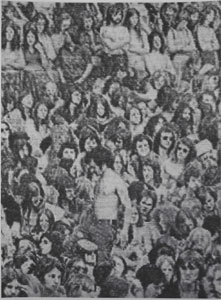 The convention of the summer show, in New York, has historically been a mixed bag. At times it's an excuse for a gallery to do something fun, restrict work hours, and chill out a bit. It also tends to be the busy season for both emerging artists and curators, with group shows dominating the docket and variably playful, political, or conceptual themes running the show. Chelsea gallery Josée Bienvenu's summer show, "microwave, six," includes seventeen emerging and mid-career artists in their annual effort to (unlike the cooking apparatus that shares its name) slow down and pay attention to artists "who commit to the obscene activity of paying attention." It's hard to say what's obscene about this act, except that it's so rarely done as to potentially render it indulgent in some people's eyes. Each of the selected artists create rather slow-cooked drawings that "document the relentless propagation of delicacy as a subversive attitude." In other words, forget the short attention spans painted by the information economy, these pieces actually manage to transmit a high level of information, even as they eschew the ephemeral forms of files and bits to take up the hard-knocked life of a work on paper. Ernesto Caivano continues his epic series of drawings about an otherworldly landscape in which a man and woman simultaneously evolve into a spaceship and a lowly earth creature. Phoebe Washburn gives us highly-systematized, if cryptic analysis of devices and histories like Gatorade Storage Tank Study. Both Alexandra Grant and Casey Jex Smith offer readings and translations of the visual qualities of language, while Jacob Dyrenforth's newspaper-style pixilated (or is it pointilated?) drawings of concert crowds speak to the age-old effort of visualists to convey the maximum amount of information in the least amount of data. These and other works in the show may give new mediaheads a chance to consider what forms beyond their immediate area of inquiry may shed light on the broader notion of transmissive and receptive processes. - Marisa Olson