When Sound Freezes Over
By Marisa Olson 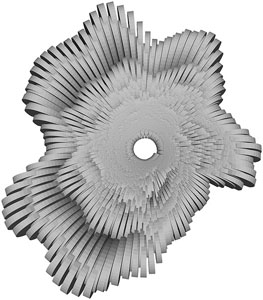 The relationship between sound and image has long entertained comparative theorists and geeks in both literary and music circles. Of course, this relationship keeps evolving with new technologies, and couplings between audio and the visual continue to grow, particularly in the context of live performances. But how do these two dyads manifest themselves in still forms? This is the question raised by "Frozen," an exhibition organized by Norwegian artist and curator Marius Watz, who has led the field of generative art with his own work, his Generator.x blog, and events focused on the work of others. The show is up through July 26th at Amsterdam's Melkweg Mediaroom, Paradiso, in conjunction with the 5 days off MEDIA festival. Everything included in it is the result of an assignment, which seems in keeping with an exhibition that responds to generative practices and computer-programmed processes. Artists Andreas Nicolas Fischer & Benjamin Maus; Leander Herzo; Daniel Widrig & Shajay Booshan; and Marius Watz have created digital prints and "audio sculptures" that respond to audioworks by Freiband and Alexander Rishaug. The artists have used techniques such as rapid prototyping, CNC, and laser cutting to make objects that map and visualize sound, in "frozen" form. Of course, these works may purport to stop time--existing almost like a single frame in a film strip--but they are utterly-time based, with the concept of frozen motion entirely scripted by the concept of time, and a processing of the structural qualities (timbre, tempo, rhythm, etc) of sounds informing the logic and form of the ultimate objects. A nice Flickr set documents the results which demonstrate both the diversity of ways in which sound can be interpreted and the fact that beauty still lies in the ear of the beholder. - Marisa Olson
Image: Marius Watz, Sound memory (Oslo Rain Manifesto), 2008

Thank you for the generous writeup, nice to see that there is interest in this project.

I have a small correction, though: Frozen was not organized by me, but by Jan Hiddink and 5 Days Off MEDIA. The Generator.x 2.0 exhibition of digital fabrication works was definitely a reference for the project (all the artists in the show were also involved in that event), but the concept of "frozen" sound was formulated by Jan Hiddink.