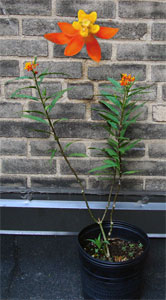 Initially, Elliott Malkin's new work, Graffiti for Butterflies, reads like a science fair project. One can just see the riveting subtitle, "Directing monarch butterflies to urban food sources along migratory routes in North America" taped-up in bold letters across the top of a trifold sign affixed with statistical charts and photographic evidence. In truth, this mostly internet-based project is a perfect spoof of the recent spate of R&D art experiments that saturate the web, performing rather than practicing science, even as it provides us with a series of informative links and nice photos of caterpillars and butterflies thriving in the wilds of midtown Manhattan. Malkin's big idea was to spraypaint printed decals of milkweed flowers (the food source of choice for Monarchs) with aerosol sunblock that reflects UV light, thus making it stand out to those creatures with "butterfly vision." The images are then to be placed remarkably close to the real thing they represent, in order to broadcast the signal (Malkin's got the techie language down pat) to the migratory creatures that they have arrived at a way station. He likens it to "the equivalent of a fast-food sign on a highway, advertising rest stops." A demo video, in simulated "butterfly vision," illustrates the process of creating these nouveau golden arches. It would be ironic if hordes of monarchs took the bait, as the same type of mimicry the artist invokes is a natural defense strategy often used by other species of butterflies hoping to masquerade as the poison creatures. So far, Malkin's only tested one "prototype," but it did manage to attract a butterfly who even colonized the potted milkweed with her own caterpillar eggs. Ultimately, he confesses to being more interested in distributing the idea than tagging the entire city himself. This shrugging-off of scientific responsibility -- a burden that tends to revolve around the affirmation of dominant paradigms -- in order to become his own open source way station for tagging instructions is totally in keeping with contemporary graffiti art (see, for example, Shepard Fairey and GRL). It will be interesting to see whether his concept takes on a migratory pattern of its own. - Marisa Olson