Crafting for a Cause
By Caitlin Jones 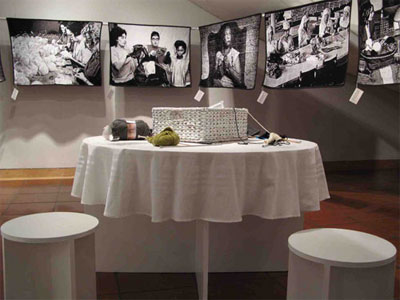 Reacting to rampant industrialization and increased division of labor at the end of the 19th century, a group of artists, designers and architects founded what would become known as the Arts and Crafts Movement. William Morris, Charles Rennie Mackintosh and others denounced the machinations of industrialized production in favor of the more romantic and socially responsible ideal of the craftsman. Although predominantly an aesthetic impulse, the ethos behind the Arts and Crafts Movement has inspired more overtly political and ecological movements in recent history. For example, in the 1960s and 70s, the suburbanization of the United States prompted increased interest in "back to the land" movements. The Foxfire community looked to the mountain culture of the Appalachians as keys to more sustainable and community oriented lifestyles, and the Whole Earth Catalog both advocated and provided tools for ecological and socially responsible living. In recent times, against the backdrop of globalization, unprecedented corporate control, and war, an interest in grassroots craft-based movements has emerged in full force. Shedding their predecessor's suspicion of technology, today's crafters realize the political benefit of the immediate access and increased connectivity afforded by new technologies. The New School for General Studies in New York City will examine the strategies of a new generation of craftsmen in the upcoming talk "Crafting Protest". Scheduled for Saturday January 26, panelists will discuss the "role of craft in forming national identities, especially in times of political turmoil or war; notions of patriotism; feminism and the domestic sphere; and economic models that circumvent conventional market models." Moderated by art historian Julia Bryan-Wilson, participants include Sabrina Gschwandtner, artist and founder of KnitKnit, a periodical that celebrates the convergence of craft and contemporary art, and Cat Mazza, whose software KnitPro was developed in opposition to sweatshop labor practices. Artist and Designer Liz Collins whose project Knitting Nation (2005-Ongoing) was part of Allison Smith's civil war re-creation and 'call to art,' the Muster (2005) will be a panelist, as will Smith. Through their powerful and deeply resonant projects these artists link the handmade and political expression and, in so doing, highlight the historical and ongoing importance of craft as an oppositional force. - Caitlin Jones