Women in Uniform
By Marisa Olson 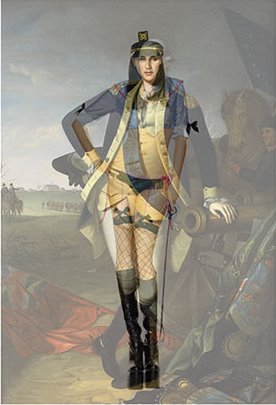 Deborah Oropallo is among a generation of artists trained in painting and printmaking who are now migrating their practice to digital media. The San Francisco-based artist does, however, continue to draw on the aesthetics and visual language of painting and the tactile metaphor of layering in her work, which often involves the use of found digital material. Of this process, she has said, "I use the computer as the tool, but painting is the language of deliberation that is running through my head..." In her newest series, Guise, the artist plucked images from websites featuring photos of women in fetish clothing. Honing-in on period costumes, Oropallo noticed that the photos tended to follow the conventions of traditional portraiture, while putting the female subjects in the stance of powerful men. Guise features over thirty prints in which these images are overlapped--a unique rhetorical maneuver. On the one hand, the layering underscores the overwhelming similarity among poses, while on the other hand it emphasizes difference. By accumulating these images, Oropallo actually deconstructs the variables of each guise. The cacophony of overlapping elements suddenly makes each image out of place, enabling the artist to contribute to the longstanding tradition of photographic portraits establishing a relationship between costume and identity, while bringing desire and power to the discussion. The series is on view at San Francisco's Gallery 16 through February 15. - Marisa Olson