Let's Do the Time Warp
By Marisa Olson 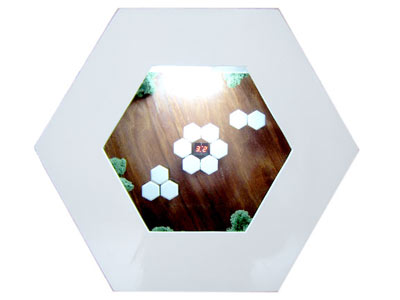 Time travel has long been a popular plot convention in science fiction and has, since at least the early 1700s, been a locus for societies' most utopian ideals regarding technology. Nonetheless, the ability to construct a working time machine has eluded countless inventors. But this week, New York-based artist Jamie O'Shea built what may amount to just that. As the world was waking up to a New Year, Tuesday, O'Shea was entering a 'time machine' of his own design. At midnight on January 1, 2008, he 'shut the door to a room with a slow clock, delayed news media, and artificial day and night cycles.' The idea is to trick his mind and body into slowing down, experiencing 36-hour days, rather than 24-hour ones. He's made use of fellow Eyebeam residents' tools in doing so, with Geraldine Juarez's Hexaclock counting two minutes for every three, and Jamie Wilkinson's Internet Delay Pedal doling out web-feeds in slower motion. O'Shea will emerge from this 'temporal deprivation chamber' on January 19th (our time) a week behind us. Given the demonstrated relativity of time--or of temporal perception, it seems accurate to describe the artist's construction as a working time machine. Skeptics or otherwise curious readers can peek in on O'Shea, via a live webcam at his site. The big question, in representations of time travel, tends to be that of how the traveler will influence the future. This query remains unanswerable except to say that our present is now O'Shea's future and he's sending us messages via a witty blog. Meanwhile, he pleas with readers, 'Time travel is boring. Please send anything to keep me company.' Consider this your opportunity to communicate with the past. - Marisa Olson