Review of "In The Private Eye" at ISE Cultural Foundation
By Caitlin Jones
The mystery genre is one of the most robust in literature, theater and film as it has a superior ability to involve the reader in the unfolding of drama. The group show "In the Private Eye," currently on view at the ISE Cultural Foundation in New York City, reflects this same level of engagement by inviting the viewer to join with six artists in the investigation of a series of crimes, cover-ups, and historical narratives. 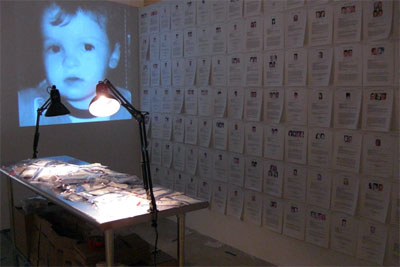 Dannielle Tegeder, The New York Index of the Invisible, 2008

The artists Amy Westpfahl and Dannielle Tegeder tackle the subject of "missing persons" in their respective ongoing projects. In the town of Thiells, NY, Westpfahl came across a cemetery, whose anonymous but numbered graves belonged to patients from Letchworth Village- a state run facility for the "Feeble-minded and Epileptic." In the Letchworth Village Project (2006-2008), Westpfahl casts herself as the protagonist in the narrative-- a race against time-- to identify these oft forgotten members of society before land developers take over the property. Dannielle Tegeder's installation The New York Index of the Invisible (2008) confronts viewers with the grisly reality of a multitude of unsolved crimes in New York State. Like a set from the crime television show "CSI," the installation is papered with missing person notices, maps, evidence bags, archival documents, a computer terminal, and a haunting slideshow of the victims. Simultaneously institutional and personal Tegeder's installation implores us to be more than idle spectators to these crimes. 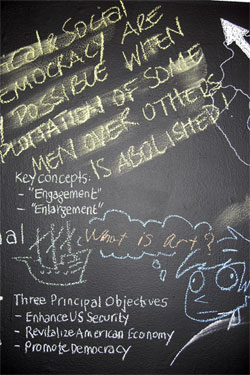 Venturing into the realm of the spy thriller, both Carlos Motta and Trevor Paglen investigate secrets of American government and military institutions. In SOA: Black and White Tales (2005-2007) Motta turns his eye to the School of the Americas (SOA), the controversial Pentagon funded military training academy for Latin American soldiers (and some would be dictators). With a simple blackboard wall drawing and newsprint handout, Motta traces this organization's history and operations, drawing attention to the nefarious involvement of the US in Latin American politics. Trevor Paglen's abstract triptych San Nicolas Islands (2007) is another group of his long-range photos of classified American military sites. Paglen's photographs of these Pacific Islands (used as missile testing grounds) reveal very little about their subject, however, this artful evidence of their existence sparks curiosity and begs further investigation. 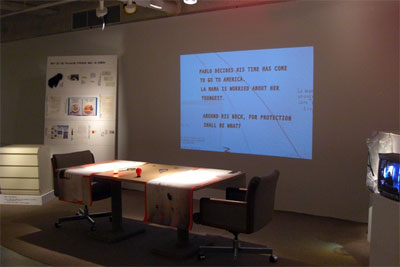 Unearthing the truth takes an entirely different form in works of Nin Brudermann and Anna Von Mertens. Brudermann's mystery found her, by way of a chest of drawers in the basement of her apartment. In it she found bank statements, video rental ID, photographs and letters, all items that pointed to a money laundering scheme involving a Chilean fish company and someone named Aurelio Z. Part installation, part interactive performance, Aurelio Z (2006/8) inserts the viewer directly into the investigation. Allowing us the freedom to follower her line of inquiry or take on the mystery ourselves. In Anna Von Mertens' embroidery series Dawn she adopts as her subject a 19th Century pioneer family who made an arduous journey from Illinois to California. Rather than simply investigating the historical evidence of this journey, Von Mertens looks for clues about their travels through the landscape�in particular the skies. By observing rotational patterns of the stars, her investigation looks beyond material evidence for answers, and presents them as rich tapestries. Sherlock Holmes once chastised his poor assistant Dr. Watson by saying, "You see, but you do not observe," and the artists of "In the Private Eye" confront us, the viewer, with the same charge. Aided by technology and increased access to information these artists place themselves in the role of the investigator and reveal to us mysteries and narratives that, while existing in plain view, must be made visible. - Caitlin Jones

I know they are missing persons posts but there is something absolutely fascinating about mug-shots. This seems to be similar. Everyone who looks at them must wonder "where are they now?" "Rich tapestries" indeed.

Well, this is certainly a different way to view art!

It does give the feeling of lost hope looking at rows of missing persons pinned on a board adn the eyes are so powerful in that photo.
<a href="http://www.handymangoldcoast.com" >Handyman Gold Coast<a/>

Imagine the emotional turmoil and heartache the family felt when their loved one disappeared. Sad.