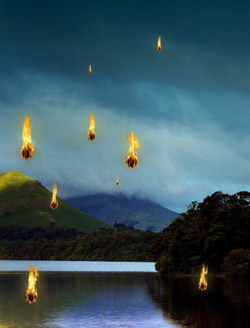 Since its earliest days, cinema has drawn comparison to the domain of magic and fantasies. Many of the form's early scholars agreed less on what film was (theatre? a new kind of pencil?) and more on its ability to psychologically transport viewers. A two-part show opening February 14 at the Hirshhorn Museum and Sculpture Garden, in Washington, D.C., explores the ongoing development of this scenario, especially as it relates to the move toward the realm of video and digital media. The first component of The Cinema Effect: Illusion, Reality and the Moving Image is thus entitled "Dreams," and it explores "film's ability to transport viewers out of their everyday lives into states that lie between wakefulness and sleep, sending them on journeys into the darker recesses of the imagination." Artists in the first half of this pioneering exhibition include Darren Almond, Michael Bell-Smith, Bruce Conner, Tacita Dean, Stan Douglas, Harun Farocki, Douglas Gordon, Rodney Graham, Gary Hill, Steve McQueen, Tony Oursler, Wolfgang Staehle, Siebren Versteeg, Andy Warhol, and others. Common among their works is a tracing of the moving image's collapse into pop culture--and vice-versa-- which is to be expected as this form of expression becomes the dominant context for communicative exchange. "Dreams" will be followed-up by a second component, "Realisms," which plumbs a fascinating irony--that "in an age when documenting 'real life' in moving image formats becomes ever easier," because of the increased availability of DIY media, "the line between fact and fiction is increasingly complicated." Both halves work together to present a fantastical and high-fidelity vision of the cinematic. - Marisa Olson

Image credit: Still from Kelly Richardson's "Exiles of the Shattered Star," 2006, from the Hirshhorn's collection. Image courtesy the artist.