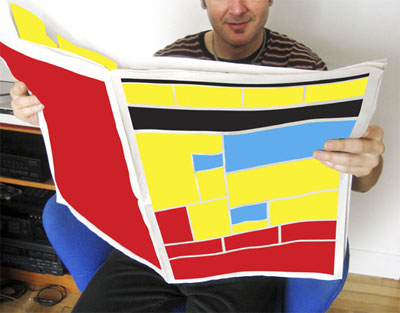 In an essay hoisted upon every media studies student ever, Walter Benjamin argues that the mechanical reproduction of art works separates the viewer from the original object and therefore diminishes that object's "ritual value." Strangely enough, Stephanie Syjuco's work takes a different approach. She gives us all reproductions, all the time. From paper TV's to faux designer furniture, these readily-reproduced images and things comment on the importance of the originals in our daily lives and the cultural value we've built-up around the notion of originality. Her current solo exhibition at the Contemporary Arts Museum Houston, entitled "Stephanie Syjuco: Total Fabrications," is full of fake design objects pulled from circulation within the mainstream -- or culturally specific niches therein -- and recreated in a way that references their genesis as well as the contextual implications (or even clichés) of reproduction. In fact, Syjuco's work further delves into the processes of production itself, and it's ritualization. Her reconstructions comment on the origin of materials, their high and low statuses within culture, the technologies through which they operate, and their impacts on systems ranging from the environment to the visual vocabulary of the zeitgeist. This is highly manifest in her ongoing project, The Berlin Wall, in which she pulls what she calls "proxy chunks" of the famous wall out of spaces around the world. These are not souvenirs from the wall, but rather a different kind of facsimile, which Syjuco feels approximates the political and architectural situation of the wall and the promises offered in its deconstruction. The proxy chunks have embarked on their own roadshow, exhibiting in new cities under plaque-capped vitrines, so as to however-falsely invoke the aura of the wall and the hope its demolishedness represents. Her Towards a New Theory of Color Reading takes local Houston Spanish-language, African American, and Filipino American newspapers and translates the text into blocks of color which have been printed on billboards and re-printed on newsprint and given out to museum visitors. The connection between color and race at play is obvious, if not tongue-in-cheek, but the resultant unlabeled illustration of similarities and differences in layout and orientation--and the visually profound invocation of change--allows readers to parse relationships and come to their own conclusions about what it means to bring these papers out of and back into circulation. These and other projects are on view at CAMH through February 22nd, and continuously on the artist's website. - Marisa Olson

Image: Stephanie Syjuco, Towards a New Theory of Color Reading, 2008