Interface Aesthetics at the Dept. of Rhythmanalysis
By Greg J. Smith 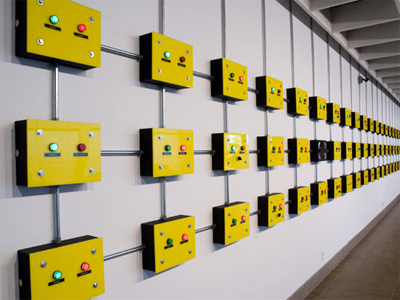 Interface aesthetics seem to push further into public consciousness with each passing month. Consumers are manic about multitouch and contemporary prototypes exploring gesture and performance have hinted at how we will be interacting with technology in the not-so-distant future. This considered, conversations about the desktop metaphor underlying personal computing or Aqua-style might seem archaic, irrelevant in light of emerging tangible media. This is, of course, not the case, and when excavating the idea of interface, one can dig back much further than screen-based interaction and find an extensive lineage of control panels and analog interfaces that prefigure the graphical user interface (GUI). An artist clearly invested in questioning the nature of interface and display is Kevin Hamilton, a researcher and educator based in Urbana, Illinois. Over the last several years Hamilton has been exploring the narrative potential of bare-bones interface and informational systems, quite notably through his ongoing Rhythmanalysis project.

Pictured above is Dept. of Rhythmanalysis: Dupage, a 2006 installation by Hamilton mounted at the Gahlberg Gallery in Glen Ellyn, Illinois. The piece, an array of 60 interconnected control panels, provides an index of "remote and local rhythms." The glossy yellow faceplate of each unit houses a pair of LED indicators which (claim to) track local, regional and global conditions. Examples of these conditions include INHALE / EXHALE, YOU'RE HERE / YOU'RE NOT, DEMOCRATIC WHITE HOUSE / REPUBLICAN WHITE HOUSE and BARBARA IS IN / BARBARA IS OUT. External streams of data inform some of these conditions, others are fiction and others absurd. The indicator on each unit displays the current status of this binary logic and the machines audibly toggle back and forth between states at varying speeds. Interaction with some of these devices is possible through turnkeys and dials which allow viewers to make a "state change." This assemblage performs as a combinatory rhythm-machine, a phase piece which suggests a technological omnipotence by way of a sterile, hermetic and universal operating system. 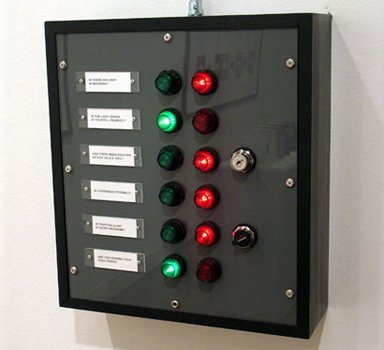 An earlier iteration of this work was the 2005 Dept. of Rhythmanalysis: Krannert, also displayed at the Gahlberg Gallery. Similarly described as "monitoring and influencing remote and local rhythms" this device tracks comparable EITHER / OR conditions, albeit on the surface of a singular unit. The scope of these states is equally disjunctive and the indicators track variables which include "is there daylight in Baghdad?" and "is the light green at Fourth and Peabody?". Space, time and context melt away under this neutralizing representational system. The Krannert Rhythmanalysis machine also operates as a musical instrument by broadcasting alerts to the gallery space via an alarm bell, announcing the "state changes" of the various indicators. As was the case with the 2006 installation, encountering this piece places the viewer in a tenuous relationship with the information being communicated and a limited means of interacting with it. 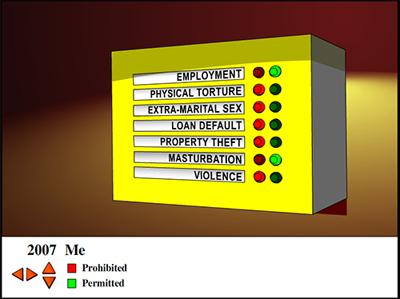 In 2007 Hamilton created a web-based version of one of his devices entitled Department of Rhythmanalysis: On Location for Blackbird, an online arts and literature journal. This work essentially functions like the Krannert Rhythmanalysis machine except that the device is nested inside a simple interface that allows the viewer to cycle through various time frames and contexts. This version of the Rhythmanalysis machine also has a distinctly autobiographical feel to it as Hamilton has "written himself into the script" and catalogued various moments from his past and current daily routines. In this piece the interface and control panel have been essentialized as a display surface, the modulation of which delivers a permutation poetry that indexes personal and geopolitical conditions. It is also worth noting that Hamilton uses the space around this machine to suggest a world of activity. Shadows fly across the faceplate of the device, voices chatter in the background and the steady drone of ambient noise situate these selected parameters amongst the clutter of everyday life.

In the statement for this work Hamilton describes his informational surfaces as "inviting skepticism towards trusted monitors" and at the same time creating "new temporal structures, new patterns and rhythms, new synchrony and disharmony." These sentiments are also explored in earlier work such as The Other End (2003) and Here and There (2004), both of which propose spartan frameworks for interaction and the codification of events, presence and time.

There is a desire to read the Dept. of Rhythmanalysis work alongside other "display array" projects such as the collaborations between Mark Hansen and Ben Rubin. This is perhaps a misguided comparison as installations like Listening Post and Moveable Type, while equally performative, provide expansive views into the information they aggregate. The rigid classification and constrained means for interaction with the Rhythmanalysis machines speaks to systems of severity and opacity. These devices, with all of their Cold War charm, remind us of the illusion of control that technology affords us as well as the suspension of disbelief implicit in engaging an interface or display.

Greg J. Smith is a Toronto-based designer and researcher with interests in media theory, representation and digital culture. He co-curates and edits the online digital arts publication Vague Terrain and blogs at Serial Consign.