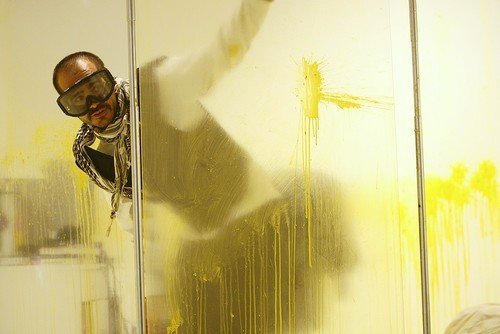 Artist Wafaa Bilal will speak at the EFA Project Space tonight at 7pm. Bilal made headlines earlier this year when Rensselaer Polytechnic Institute's administration pulled the plug on the exhibition of his project exploring identity and propagandist video games The Night of Bush Capturing: A Virtual Jihadi. Bilal then moved the show to the Sanctuary for Independent Media, at which point the city of Troy promptly responded by shutting down the space due to minor infractions. (The short documentary Art Does Not Equal Terrorism follows the entire fiasco.) Tonight Bilal will turn his attention to a previous project from 2007, Domestic Tension, in which he stationed himself for 31 days as a moving target for a robotic paintball machine controlled by users over the internet. Born and raised in Iraq, Bilal's work often deals with the tension involved in belonging to two opposing territories, the United States and his native country. Journalist David Gargill will moderate the discussion.