Let's Get Physical
By Marisa Olson 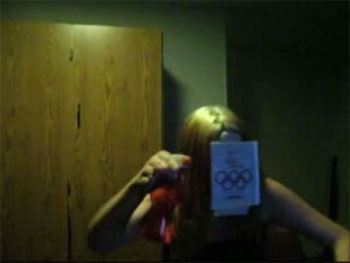 Los Angeles-based artist Xtine Hanson calls her Mechanical Olympics "an alternative media spectacle to the Olympic games." Indeed, the project humorously turns the otherwise tightly-regulated machinery of both web commerce and international sports competition on their heads. Launching simultaneously with the Beijing games, on August 8th, The Mechanical Olympics invite the public to compete in sports previously restricted to people of specific genders and nationalities. The artist has enlisted participants via Amazon's Mechanical Turk site in which users receive paid commissions for completing tasks almost but not quite so simple a machine could complete them, thus joining the ranks of participatory projects like AddArt, Sheep Market, and Ten Thousand Cents, which also employed this service. Hanson likens this playful outsourcing of labor to working with artificial intelligence. Nonetheless, it's clear that her worker bees are bringing a hefty dose of personal creativity to this web-based role-playing game. A perusal of the videos thus far uploaded to The Mechanical Olympics' YouTube channel features Starbucks baristas working overtime to put their own spin on the classic sport of Hockey, and the woman who represents South Africa in the Freestyle Swimming event could win a gold medal in charm for her combined use of a spray bottle and trippy arm movements. When accepting one of the project's Human Intelligence Tasks (or HITs), the athletes agree to wear a pre-designed sign indicating their sport, gender, and country (they get to pick their own number) and to be paid between $1-3 dollars upon emailing Hanson a URL to their 30-60 second video. The footage will be posted daily, during the Olympics, and voted upon by blog readers. Rather than medals, the winning artificial Olympians receive bonus commissions, much like their more famous counterparts whose accomplishments score them lucrative endorsement deals. - Marisa Olson