Tools of the Trade is an ongoing feature on Rhizome. Here, we invite artists to discuss the nuts and bolts behind their projects. Justin Downs worked with David Byrne in the design and fabrication of his Playing the Building installation for Creative Time (on view until August 24th). Below, Justin discusses how the work was created. Justin is an independent fabricator and a recent graduate from NYU's ITP program. His website can be found here.

The Play the Building project is based around an old Weaver organ and the premise of democratizing spaces and sound. I designed and fabricated this project in 2005 with Arun Nair for/with David Byrne. It was originally installed in a project space named Fargfabriken that resides in Stockholm, Sweden. Fargfabriken is a 19th century munitions factory built with cast iron and rivet technology. I found that spaces built with older construction techniques of cast iron and rivets are more amenable to sound. The current reinstallation of Playing the Building resides at the Battery Maritime Building in southern Manhattan, a building which employs the same infrastructure as Fargfabriken, making it a good match for the project. During this second iteration, I worked with Mark McNamara and Nick Emmett. 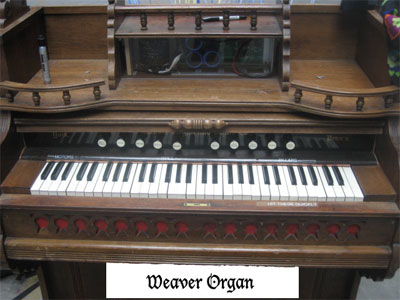 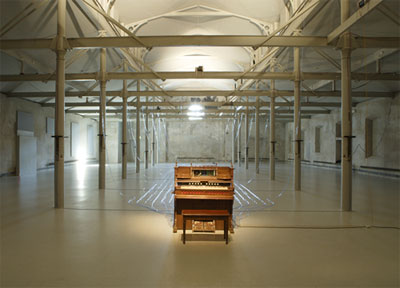 Installation at the Fargfabriken in Stockholm 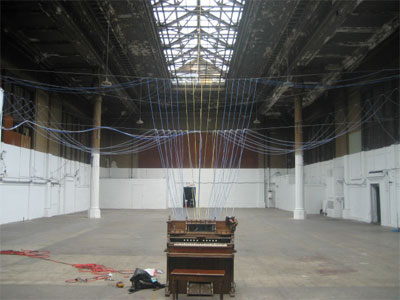 Installation at the Battery Maritime Building in New York City

Functionally, the organ allows a participant to interactively create tones and sounds from the surrounding space by striking its keys. There are three primary methods of interaction with the building, a percussive device (the solenoids), a wind based device (the heating pipes) and a resonate device (the motors). The devices are physically mounted to the building's infrastructure, so the noises produced by a room or building are dependent entirely on the actual building.

The major design considerations with this project were:
A.To keep the system purely analog, so no digital interpretation would be present in linking the user and the resulting sound.
B.To have no artificial or electronic amplification of the noises and, by so doing, avoiding a singular centralized source of sound.
This creates a sonic space that is more akin to walking in the woods or a street setting, where the hierarchy of sonic interest is caused by the placement and amplitude of noise. This method creates more of a space or environment than the fixed spatial delivery found in a concert or performance. 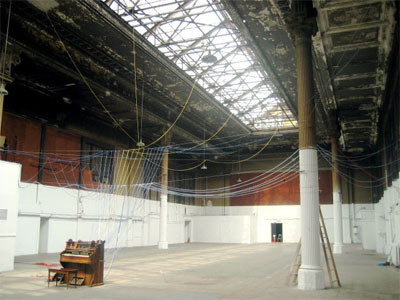 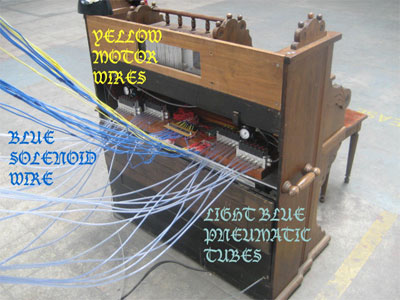 
A series of switches mounted under the organ's original keyboard regulates the interaction the user has with the device. When a key is pressed, the switch underneath grounds the attached device activating it. The control power supply used to regulate the devices is a 24V DC source, which sends power out over the lines found on the back of the organ. The yellow lines go to the motors and the dark blue lines activate the solenoids, the clear tubing delivers pressurized air and is controlled by the two regulator banks in the back. I decided to use a higher voltage (24V) than is normally used for control applications (12V) because of the uncertain run lengths needed for each new building. This way, even if we came across a situation which required us to run a bunch of cable, the line drop would not dictate the placement of the organ. 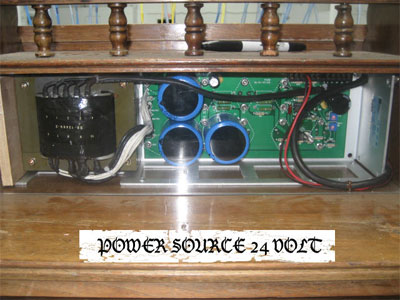 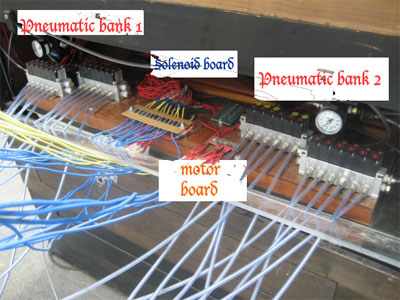 A quick run down of the devices in the organ:


The solenoid mechanisms are striking devices used to create percussive tones from the building by delivering a quick blow to the structures they are strapped to. 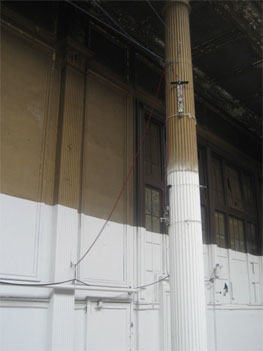 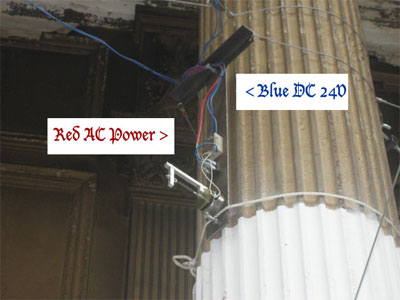 
When a solenoid key is pressed, the grounded circuit in the organ delivers current to the little R/C circuit, and this action pulls current through the 24V line (which leads out to a relay mounted on the device). The mounted relay switches the 110V AC activation power for the solenoid on and off. Once triggered, the 110V AC source gets rectified into DC current and is delivered to the solenoid, causing a hard strike against the pillar to occur. The strike time of the solenoid is regulated by the R/C circuit and is tuned for about a half second strike. The other benefit of using the capacitor/resistor circuit to initiate the strike, is the effective feel caused by the fill time of the circuit. Due to the fill/discharge rate, faster repetitious key presses have less power compared with a slower press, giving the feel of analog amplitude. The spring attached to the back recoils the solenoid for the next strike. 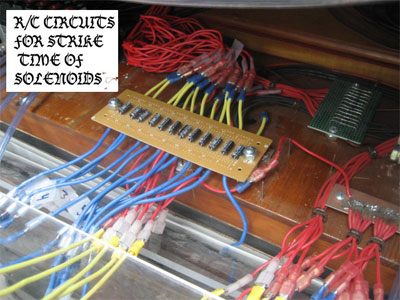 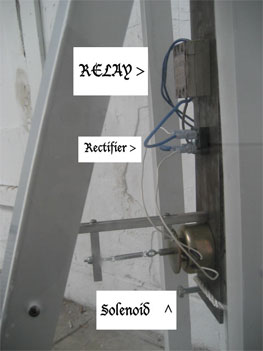 
The motors are strapped to girders and are tuned to different frequencies depending on the girder length; this gives a vibratory effect like a string of a violin. When installing the motors, a range of frequencies are tried in order to find the right tone. Going through the frequencies, you can see when a girder hits its resonate frequency by its jumpy movement, which recalls soldiers walking over a suspension bridge. 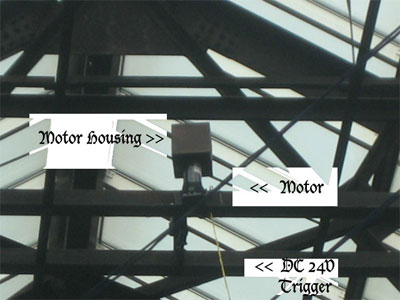 
When a motor key is pressed, the circuit in the organ is grounded, and this action pulls current through the 24V line (which leads out to a relay mounted on the motor device). The motor has an off-centered shaft and speed control, which are both modifiable to change the frequency of the vibration in the motor. When the relay is tripped, 110V AC are delivered to the speed control, from there it is taken down to 90V and rectified to DC. This causes the motors to turn on and the girders to vibrate, producing a base sound.


The heating pipes have 1" holes bored into them, which produce different musical tones when blown over. There are four separate valve banks that turn on and off two different air pressures. Each pressure, when applied to a hole, produces a different octave. With the combination of the two pressures, a third higher octave is produced, allowing for three different octaves from each hole. 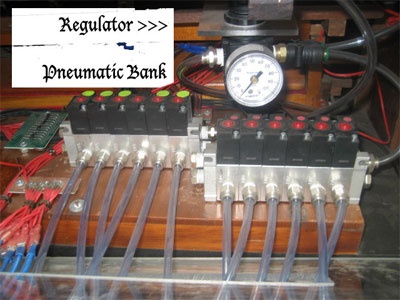 
When a pipe key is pressed the circuit in the organ is grounded, this opens the associated valve bank causing a flow of air to leave the bank and flow over the hole. The air pressure is supplied by an 80-gallon compressor, which is fed into the organ. It is then flown into two regulators, which dial in the desired pressures and feed out to the valve banks. The air pressures are re-combined at the heating pipe to avoid excessive pressure drop. 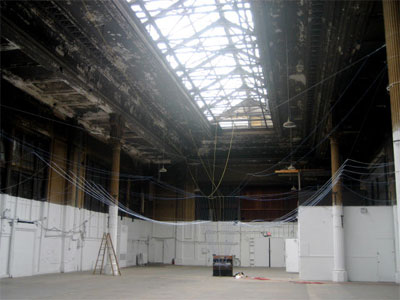 A warm thanks to Todomundo, David Byrne and Danielle Spencer.