In the Mix
By Ed Halter 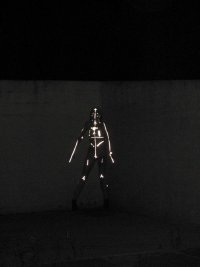 Tonight at Exit Art in New York comes a bevy of performances as part of the space's current potpourri-style exhibit Summer Mixtape Volume 1: the Get Smart edition. Critic and artist Nick Stillman will present a slide lecture on "the best art today," accompanied by sounds from noisemakers Knyfe Hyts and artist Corey D'Augustine. But afterwards some mysterious darkly-glowing strangeness will emerge with "A Network of Love," an event by Donna Huanca (aka RUA MINX), the duo of Daniel Keller and Nik Kosmas, better known as AIDS-3D, and dancer Helga Wretman. Hard details are slim, but according to the trio's own statement, expect a futuristic post-apocalyptic scenario in which "the last children of Eve struggle to maintain their digital lifestyles" after "the old systems of power have collapsed." An earlier blurb from Huanca stated that the show may include such items as drum machines, videos, sewing machines, and animals. Exit Art curators promise us there will be lasers involved; we strongly suspect there may also be black lights and phosphorescent paint. What we do know for sure is that Rhizome's own Ceci Moss will be participating in the sonic aspects of the happening, nicely rounding out the inclusion of Rhizome team members Marisa Olson and Tyler Coburn in the exhibit itself. - Ed Halter