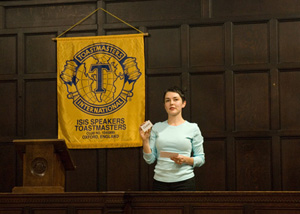 What's in a voice? In these days of texting one's "vote" for their favorite singer on American Idol, the relationship between politics and using one's voice seem to have become estranged. Sure, the ability of siren's songs and golden throats to entertain us has an important cultural position, but the voice has also been used to convey oral histories, to negotiate terms, to speak for those who cannot, and even to lure, summon, and cast spells. Taking place all over New York City, the upcoming Creative Time program "Hey Hey Glossolalia" takes a closer look at (er... listen to?) the voice in a medley of programs as wide as Mariah Carey's vocal range. Interesting highlights include a conversation about truth and language between artist Rigo 23 and Black Panther Party member Robert King Wilkerson, who will discuss the "use of speech under pressure of complete isolation" during his 29 years spent in solitary confinement in Angola Prison. At Brooklyn's Pratt Institute, Chris Evans will orchestrate the first iteration in the United States of his Cop Talk project, in which art students meet with a police recruiter to consider a new career option. Carey Young will present a performance called Speechcraft, a subtle revision on a traditional Toastmasters meeting in which the assembled rhetors are asked to speak before an audience of 250 "about objects that Young finds artistically inspiring" and are subsequently "evaluated by fellow members in a cycle of inspiration, review, and reward." In a concert entitled "The Voice (After Mercedes McCambridge)," artists No Bra (Susanne Oberbeck), Genesis P-Orridge, Rammellzee, and Ian Svenonius will present performances inspired by the actress who dubbed the voice of a demonically-posessed character in the film The Exorcist. The pieces promise to "skirt the boundaries between information-giving and noise, as well as language and music--pushing the voice to its very limits." All of this and more will be accompanied by a two-part publication co-produced and designed by "Hey Hey Glossolalia" curator Mark Beasley and Dexter Sinister. Philosopher Walter Ong argued that writing is a technology that has alienated the voice, while tech-historian Carolyn Marvin suggested that the body can be read as "a communications medium, that is, as a mode for conveying information about electricity." One thing all of "Hey Hey's" programs make clear is that we stand to lose quite a bit if we continue privileging other media over the embodied voice. - Marisa Olson