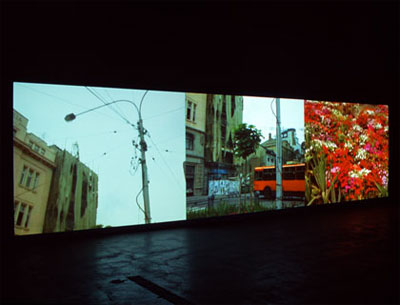 Norwegian-Serbian artists Synne Bull and Dragan Miletic (a.k.a. BULL.MILETIC) exemplify the modern fantasy of the nomadic artist, taking up shifting residences around the globe in conjunction with various residencies and exhibitions. This experience of constantly re-situating oneself in relationship to a new political geography plays out beautifully in their video works which are concerned with exploring "the relationship between physical and mental space.... to examine their immediate surroundings (architecture, objects, landscape, urbanity) as containers of emotions, memories, and political decisions." Their current solo installation in the salon of the Museum of Contemporary Art, Belgrade, is entitled Unfinished: Scars of the Past/ Face of the Future and in it the couple creates a romantic tension--a sort of "love rhombus"--between the eyes of the viewer, those of the artists, the perspective of the camera, and the visage of the space itself. Because they are interested in what gets visually and ideologically framed-out of the histories of city spaces, the artists tried to construct a sense of objectivity in developing a method that doesn't require them to peer through a lens in order to capture on film what they see as the tension between Belgrade's past and future, as manifest in the tension between monumental architecture and new improvised developments. This method is one which captures a 360-degree panorama, feeding each sliced point-of-view into a streaming loop, thus effecting a psychological and visual sense of continuity that places the construct of history on a more fluid continuum while likening both video-making and video-viewing to the process of "mental mapping." The piece will be on view through May 12th. - Marisa Olson

Image credit: Bull.Miletic, Unfinished: Scars of the Past/ Face of the Future, video installation detail, 2007