No Holds Barred
By Tyler Coburn 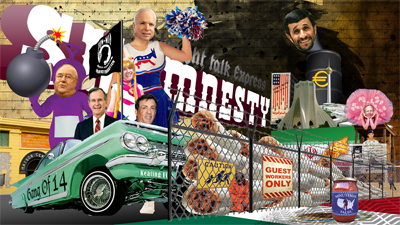 After a standout contribution to Postmasters' summer 2007 group show - which caused even tough cookie critic Roberta Smith to advise New York Times readers to "take notice" - Kenneth Tin-Kin Hung returns to the gallery this month with an accomplished solo turn, "Residential Erection," running through May 10th. Spanning the space's two rooms are the artist's recent video contributions to his brand of twenty-first century baroque, Residential Erection (2008) and Gas Zappers (2007), as well as digital prints and monumental pop-up displays, all deriving imagery from Residential Erection. While the pop-ups offer interesting translations of Hung's collage-heavy video practice into the sculptural realm, they ultimately feel secondary to the videos themselves, which interpolate political hubris and prop-like flatness with a greater level of sophistication, evoking theater sets, commercial advertisements, image search refuse and one-on-one combat video games. All of these references (and countless others) make a turn on Hung's digital stage, collectively giving a performance as critical of contemporary American politics as it is symptomatic of the artist as capitalist-schizophrenic par excellence. In one of the choicer scenes from Residential Erection, for example, an infantile Barack Obama suckles from the teat of mega-advocate Oprah Winfrey (in Virgin Mary attire), only to transform into a variation on Ali G's Borat, emblazoned with the logos of Verizon, UBS and a handful of his other corporate campaign sponsors. At another moment, a cadre of conservatives roll out the "Straight Talk Express," led by Republican cheerleader John McCain - replete with tutu - and proceed to erect a chain-link fence, hoard burritos and manufacture "Minutemen Salsa." Hung's garishly Pop take is thus no disguise for our nation's unsavory realities, but rather uses the aesthetics of mass-culture to dispel the sleek, rhetorical surface of American politics and tease out its dirty underbelly. - Tyler Coburn