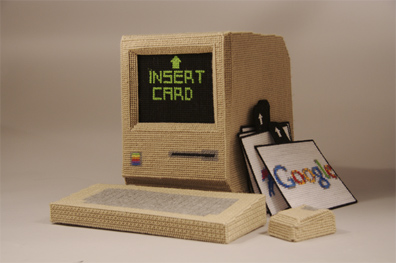 Ben Fino-Radin aligns his needlepoint work with the emerging genre of 'craft-hacking.' In his case, the Providence-based artist (who has also made his fair share of net art and electronic music) makes crafty sculptures that give form to otherwise 'intangible digital ephemera.' His large-scale representations of old web browser hourglasses suggest the nerdcore set's equivalent of Flava Flav's symbolic timepieces, while his boxy 3D gloved hyperlink pointer points explicitly to the net, pushing the language of browsing into a visceral realm often overlooked by media theorists. It's hard to call the act of pulling yarn through a plastic grid 'new' media, but the work undeniably comments on the status of technology in our domestic lives while recalling the history of homebrew hardware and software kits. Fino-Radin's 'Software' is a brilliant example of that lofty artistic tradition of estranging viewers from a familiar object in order to see it in a new light. The piece is a scaled replica of the Mac SE, complete with mouse and keyboard. The monitor's window has an open slit through which viewers can slide embroidered cards replicating popular websites such as Yahoo and Google, or cute emoticons. Thus, the work is not only interactive, but it also forges a connection between old school craft circles and the collaborative spirit of the open source community. The artist likens his practice to the copy-and-paste assemblages of Web 2.0 hackers and his patterns, palette, and dithering structure are determined by .gif compression standards. Ultimately, he says, "The environments I create with these objects are spaces for the vernacular of crafts and personal computers to rub up against each other with the goal of constructing a fictitious culture with it's own depth of tradition, ritual, and mysticism." - Marisa Olson