Inwound plumbs the reciprocal exchanges between sound, location, and listeners at Postdamer Platz. In the first week of July, public access will be granted to a provisional listening chamber set up within the subterranean mechanical spaces of the Postdamer Platz station. The surrounding environmental vibrations at the site of the station will be reconfigured into an intensified relational field of sound. The project utilizes transducers that are literally plugged into the urban clutter. By attaching the transducers, the host structures become quasi-microphones listening outwards as well as in on themselves.

A selection of zones in and around the station will transmit their live signals to the chamber where they then get collected and emitted via a phased-array of suspended loudspeakers. Within the listening chamber, the various signals are brought into critical play as amplified material vibrations are interlaced with defamiliarized ambient sounds to form an immersive tapestry of sonic-spatial configurations.

By approaching the environment as sonically continuous and the site as materially unstable, Inwound empirically taps into the fluctuating undercurrents of everyday experience in order to render palpable the oscillations from which both 'listener' and 'place' emerge inherently interwound. 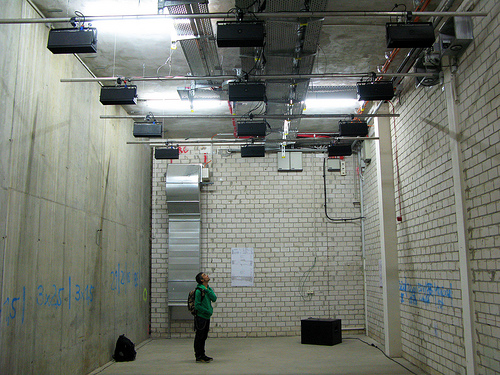