The initial opening and concert was at CENART which is housing the exhibition of finalists from the open call for the TRANSITIO prize. Many of the finalists were represented by video documentation such as Usman Haque’s “Open Burble.” There was a beautifully shot three panel video projection by Erik Olofsen titled “Drives”. Below are a few projects installed in the Art Center’s gallery.

My favorite project which is visually striking, conceptually intriguing and offers free packaged Mexican dirt is “Tierra y Libertad” (Earth and Liberty) (2007) by Ivan Puig based in Mexico. Puig has constructed a machine that deposits dirt taken from the base of CENARTS into red plastic cups that are then deposited into plastic bags that are sealed and stamped for the visitors to take. 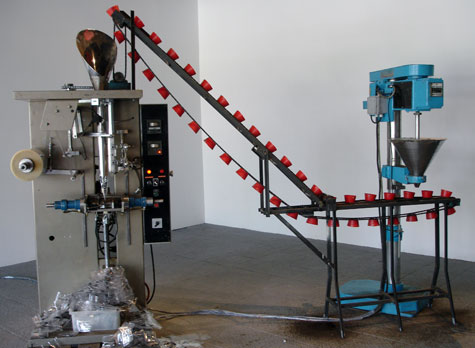 SARoskop (2007) by Karin Lingnau and Martin Hesselmeier based in Cologne visualizes the electromagnetic waves in the immediate area. If one uses their cell phone near the grid-like installation SARoskop, the objects come alive, moving horizontally on a rail that each component is mounted on and displaying the frequency of the call. 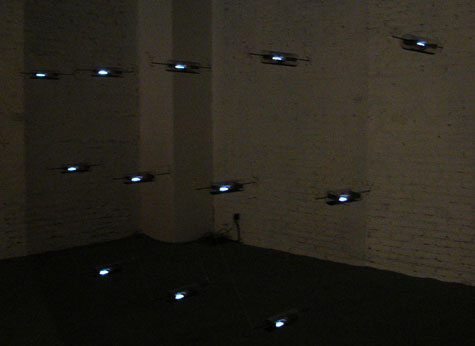