Serial Port: A Brief History of Laptop Music, by Marc Weidenbaum
By navasse 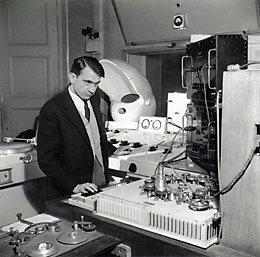 Pierre Schaeffer in 1952 playing the phonogene a clavier, a tape recorder with its speed altered by playing any of twelve keys on a keyboard. Photo courtesy of GRM.
Image and text source: http://www.newmusicbox.org/

Inside the Box: The computer comes out to play

There's often a vertical plane between musician and audience. The sheet-music stand paved the way for the upturned plastic shell of the turntable, and today, chances are that rectangle obscuring the face of the performer on stage is the screen of a laptop computer, which has emerged as a ubiquitous music-making tool.