As sonambiente berlin2006 is spread out throughout Berlin mitte, several large scale installations are located at both Akademie der Kunste in the old east and west of Berlin. Below are a selection of projects installed at Akademie der Kunste at Pariser Platz, on the old East side of Berlin. Their were several other projects, but I only documented the ones that I was intrigued by.

Near the entrance of Akademie der Kunste sits Jan-Peter E.R Sonntag "Modern Minimal Disco" where one stands on a round steel pedestal that feels as if it is hiding a giant subwoofer while bright lights shine on you as if you were the center piece of a photo shoot and if that isn't enough attention behind one is a wall sized mirror with the listener as the focal point. The audio presents a narrative that follows a progression that reaches nerve wrecking peak while the pedestal rumbles under one's feet, the lights shine and the listener begins to reach a club like ecstasy. 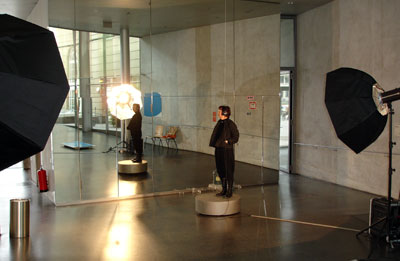 One room contains two works by Tilman Kuntzel - "Maintenance Measures for the SoundUnit Fan and Soundwall?" and "Sleep Capsule." The first presents a wall of shelves with the adidas footballs designed for the 2006 world cups all listening via headphones to the matches played. Each ball represents a country playing in the world cup and each ball listens to its country's games in its proper language. These audio broadcasts are being recorded and at the end of the World Cup Kuntzel will transform this recordings into an audio collage, I think largely composed of "GOAL" or "GOL" or "TOR"... and all the other forms of crying in happiness at one's nation's goal... 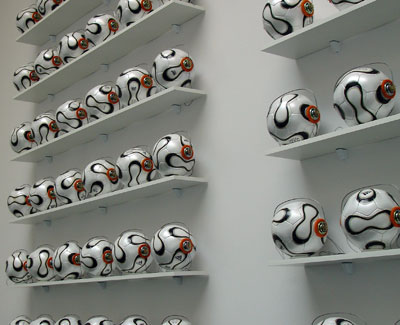 "Maintenance Measures for the SoundUnit Fan and Soundwall?" by Tilman Kuntzel

And across from this soccer balls sits an isolation room where one may lay down and escape all the hysteria of the World Cup. 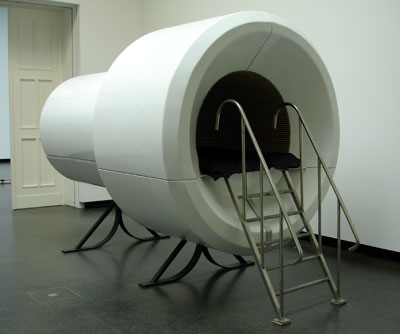 As one continues into the next gallery, elegantly installed is Bernhard Leitner's Serpentinata II in which several speakers play their own solitary audio. As one moves from speaker to speaker, one feels as if s/he is moving through a sound scape. The sounds of each speaker are incredibly crisp and alluring.

The highlight of this portion of sonambiente is Janet Cardiff and Georges Bures Miller "Opera for a Small Room." As usual with this duo's work they create an enthralling narrative with great technical skill. As I understand it, they have recreated the listening room of an opera lover. The individual may be a fiction, as the installation with exquisite surround sound, outside the reconstructed room tells a story composed of the records of the character. The installation becomes a bit Disneyesque with it's thundering sound and flashing lights, for a moment it reminded me of Disneyland's Tiki Tiki room in which the birds come alive and suddenly a terrifying storm comes along. I realize that this sounds like a negative critique, but in reality I absolutely love this piece, it is installation art, sound art, theater, fiction, beautifully created. [....] 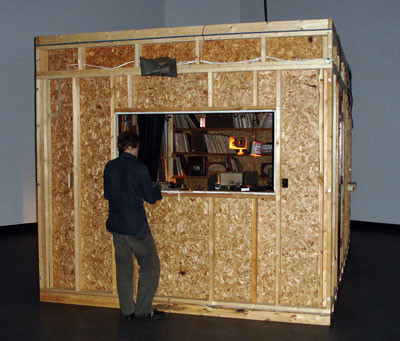 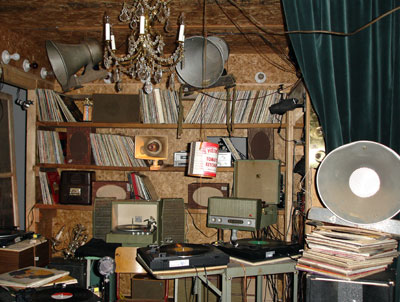