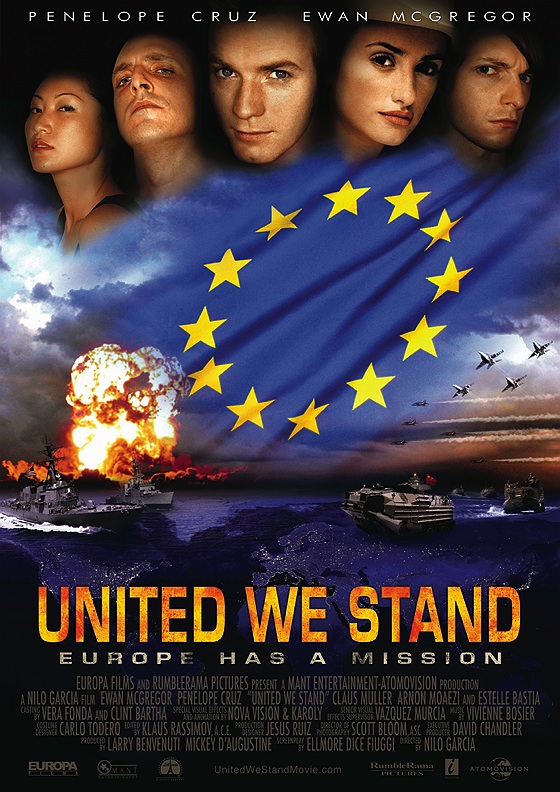 Fake European propaganda movie hits Austria and Bologna Mattes' grand artwork keeps on spreading in both the public and the media space.

'United We Stand' is the title of the much-hyped spy/action movie wholly produced by Europe, a large-scale propagandistic stunt that has in the past few months stirred much controversy. Too bad the movie doesn't actually exist, but it is instead the latest insane provocation of the artists' couple Eva and Franco Mattes, better known as 0100101110101101.ORG. After Berlin, Brussels, Barcelona, New York and Bangalore, the gigantic performance has now landed in Austria and Bologna.

While the movie itself doesn't exist, the actors and the flashy poster do. They portray the inspired faces of the main characters surrounded by the blue of the European flag and by ruesome war scenes. The movie's Web site also exists - www.UnitedWeStandMovie.com - and it is accompanied by an extensive advertising campaign covering half the globe, causing extreme reactions in both the streets and the media.

"United We Stand" Eva Mattes explains "mimics the typical Hollywood action movie where the US always wins and saves the world. We have used their clichéd visual elements, but we have replaced their flag with the European one. The outcome is quite disturbing, it seems to me that it better communicates what we often take for granted, rather than stating what it truly represents".

In the past months, the movie's posters have appeared on the remains of the Berlin wall, in front of the European Parliament, underneath the Empire State Building and on the picturesque walls of Bangalore, India. The campaign reaches across small urban centers as well as the advertising-crowded streets of global metropolises. Right now, as Austria is about to take over the European presidency, the advertising for 'United We Stand' is appearing on dozens of large advertising billboards along the Austrian roads, visible from hundreds of yards away.

Still in Europe, but just further south, in Bologna, Italy, the flocks of movie fans that notoriously crowd the city have lately been wondering how a blockbuster movie with such big names as Ewan McGregor and Penelope Cruz could be released without them knowing it in advance. Different reactions were found on the McGregor's official fan site: "If Ewan decided to do it, I would definitely see it!".

"The choice of the subject" writes Flavia De Sanctis Mangelli on the Italian newspaper l'Unità during the days of the New York campaign "a supposed war between the United States and China, with Europe trying to solve the case through diplomacy, is soaked with subtle and ironic provocation. How will Europe convince the two super powers? How can European political culture stand up to the great propaganda simplifications of Hollywood? The work is a poignant take on the tremendous power that the media has in the formation of consensus, as well as a biting political satire against a very small Europe, that only united could succeed in having its voice heard".

The enormous artwork keeps on spreading, exploiting any existing medium, from the traditional news media, such as TV and the press, to word-of-mouth and the Internet. "United We Stand" writes Ben Davis on Artnet Magazine "with its focus on rejiggering pop cultural codes in social space, is a canny updating of Pop art for the age of viral marketing, when the mass media has penetrated firmly into the everyday".

Parallel to the international promotional campaign, the work is exhibited until January the 21st at Postmasters Gallery, New York, and at Arte Fiera (January 27-30), in the Fabio Paris Art Gallery (Pad. 21, Stand B15).

Eva and Franco Mattes - internationally known as 0100101110101101.ORG - are a couple of restless European con-artists who use non-conventional communication tactics to obtain the largest visibility with the minimal effort. Past works include inventing and promoting a nonexistent artist; spreading a computer virus as a work of art; challenging and defeating Nike Corporation in a legal battle for a fake advertising campaign.