Interesting factoid I just learned: Cory Arcangel, whose hacked Nintendo cartridge piece Japanese Driving Game is depicted in the GIF above, is a relative of Pop artist Allan D'Arcangelo. Not sure the exact kinship--a cousin, but no one in the family's exactly sure how many steps removed. D'Arcangelo passed away in the '90s (and since we're talking about a distant cousin, this isn't a story of art world dynasty building, much as that might disappoint the dish-minded); some images via google are below. A frequent theme of D'Arcangelo's was road signs and American auto culture. The affinity between his art and the above piece of Arcangel's--which subtracted the cars from an '80s video game leaving the highway, signage, and surrounding landscape--is amusing. D'Arcangelo isn't as well known Lichtenstein or Warhol, but I've always liked his work. He's one of those "impure Pop" artists, like John Wesley, whose personal style usually peeks out from behind the genre's bland corporate facade. 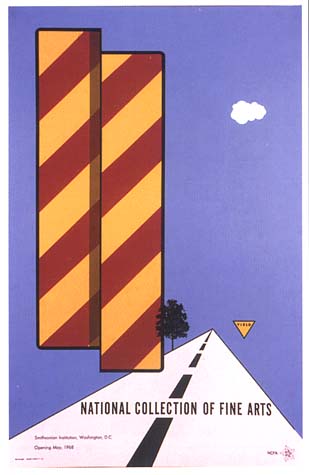