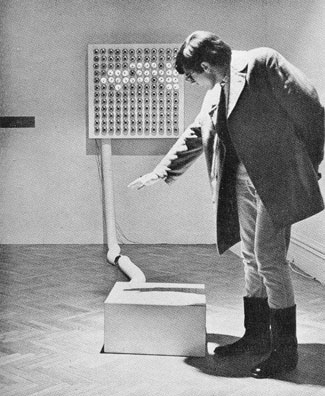 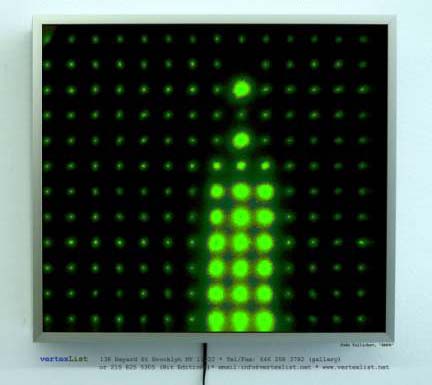 
"Superlowrez" is an editioned series of Jim Campbell-like, or ahem, Downey-and-Pitts-like LED boxes. The 8 invited artists had the next-to-impossible task of distinguishing themselves as unique creative entities with a pallette consisting solely of a 12 X 14 pixel matrix, 8 levels of brightness for each pixel, and 1984 frames of animation (what each lightbox's chip holds). One of the more phallo-logo-ideographically punchy works, Tallichet's EMPR, is based on Warhol's Empire State Building film. The rest tended to blur together in the viewer's mind--in fact the 8 boxes looked like a rather handsome (if derivative) solo show. Lots of Space Invader-y looking stuff, as you might gather.

The sheer insurmountability and inadvertent bubble-popping anti-pretentiousness of the project reminded me of a piece from the '80s--PM Summer's 100 Photographers (Aborted). In that work, Summer gave a polaroid SX-70 camera to a range of different photographers--artists, art directors, photojournalists, product photographers, paparazzi--and asked them to photograph a small locked wooden box with a slot in the top. The polaroid was dropped in the slot and at the end of the project, the photos were removed and exhibited in a grid with no indication of authorship. It was amusing and sad to see how everyone struggled to be "original" with such a limited set of parameters: shooting the box from the ground looking up (check--several), shooting it blurry (bunch of those), extreme closeups (you bet), all black, all white, and not very many more strategems. Sorry to cast the pall of despair on the vertexList project, but I found the sociology, and the way the boxes got fractionally more interesting through learning the anecdotes and back stories about what each one actually was, to be more compelling than the visuals themselves. And since I'm in the "experience trumps narrative" camp--that's a criticism. Now, if I'd done one it would have been kick ass. No it wouldn't.