The Kinetic Image
By Rhizome 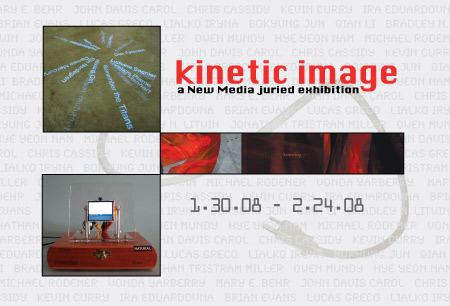 This exhibition highlights the latest developments in New Media and the more traditional approach to kinetic sculpture. Our juror is Chicago artist Patrick Lichty who is also a digital intermedia designer, writer, professor and independent curator. Lichty's choices feature work by artists from across the country and an artist from the Ukraine. The chosen work examines art in motion, from time-based video to kinetic sculpture to work that gives the illusion of motion.

There were close to 200 entries for Lichty to choose from, and as he began this curatorial challenge he started by asking the question, 'what is a kinetic image, given that kinetic art has been around for a very long time?' He also asks the question, 'what is the nature of motion-based arts, and how is the idea of motion so inspirational to the human animal that it inspires us to create kinetic works?' He challenged himself with the quest to answer these very broad questions by choosing work that includes video and new digital forms but also including work that acknowledged a variety of content that expressed and portrayed an illusion of motion.